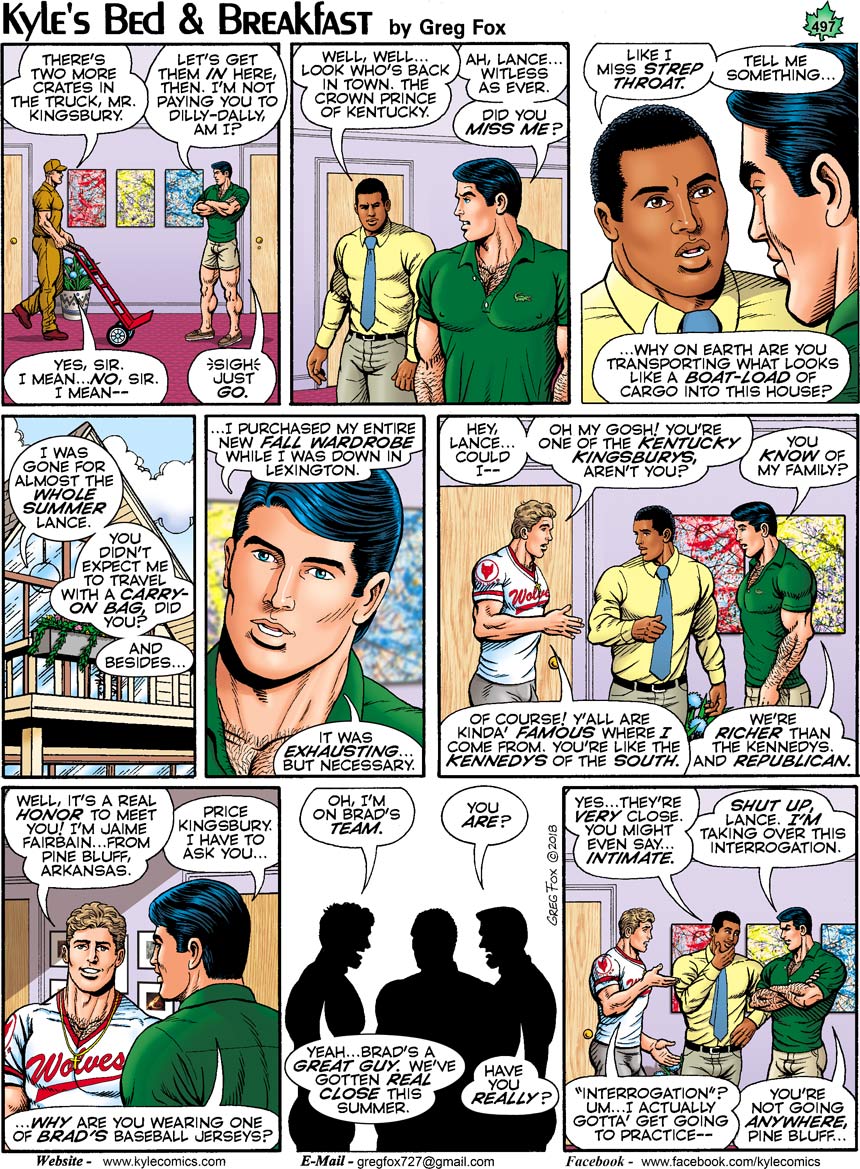 I'm elated for several reasons why Price is back;

1. COMEDY - he's clearly the 'Reggie Mantle" of the B&B; he schemes in the name of selfish possession, but it ALWAYS bites in his (juicy) ass;

2. PLOTLINE - he brings the DRAMA, therefore anyone's plotline moves effortlessly, even, when he's not part of it; he can make a funky quip, and be the center of attention...

3. 'EVIL' - his snappy, queen-y demeanor is a (sometimes)welcome respite from the warm, laid-back personalities that reside at the B&B; Drew can habit those qualities, with welcome ease, but we KNOW when Price comes back.....RIGHT NOW!!!!! >: (

4. JAIME - we know he's gonna be up to NO kinds of good, with this Brad / Jaime / Price angle; therefore the storylines have a little more 'bang' to them with an 'evil' character at the helm...

...P.S.; you may be still mad at me for my previous story-line critique, Greg, but are you gonna be furious, if I said I don't like Jaime's new haircut?! : ( ...where'all the shaggy-haired guys go?!

....Rich..why, that meshugenah...oh, well, as long as Jaime still bends over in the laundry room, in those white spandex shorts,..s'all good!

As much as I love the misunderstanding love triangle blooming, I'm honestly more interested in the religious aspect of Jaime and Price's forming relationship since Price comes from a right-wing Christian family, and Jaime so happens to know his family. I'd love to see Jaime's reaction to Price who is supposed to have the same faith be a gay man and turn out to be not a good person or all that concern with religion as far as I've seen. And oh god if Richard came into the equation to share every sin Price had done in the B&B, work and university!!!!

Makes me wonder if Jaime will try to get Price to come to church with him. Definitely be amusing to see Price go to a holy place. Richard and Lance would definitely get a kick out of that. And I would get a kick out of Brad being pushed out of the equation since I'm actually hoping for Jaime and Price to form a friendship of their own. Price needs more friends to open up to but not necessarily lose his devilish ways.

I enjoyed Price's predictable jealousy, was a tad skeptical that the Kingsburys are apparently more influential to someone from Arkansas than the Walton family (of Wal-mart, not John-boy, fame), but my big takeaway from this episode was a bizarre desire to see Price and Lance, easily the two most reprehensible residents, suddenly start to make out in the midst of trading barbs.

I would never have guessed.

Just wanted to let everyone know that the next episode, normally scheduled for Tuesday, has been bumped up to Wednesday, because Tuesday is 9/11. It felt important that we reserve that day for commemorating those we lost. The new episode will be up & posted at 6:45 am EDT, on Wednesday, Sept. 12th.

...I just hope I get a little PDA (and some T n'A) from the Boys in the next installment (preferably from Jaime or Price!) ha=HAAAA! ; )

CHOW- OOOPS, hey, @magicmagus; I know the proper spelling is 'Ciao'....I only call it 'chow', to indicate I want posters / readers to 'feast' on my posting...and, I feasted on a coupl'a sexy italianos myself, so no offense taken...ha-HAAAAA! >: P manga, manga!!