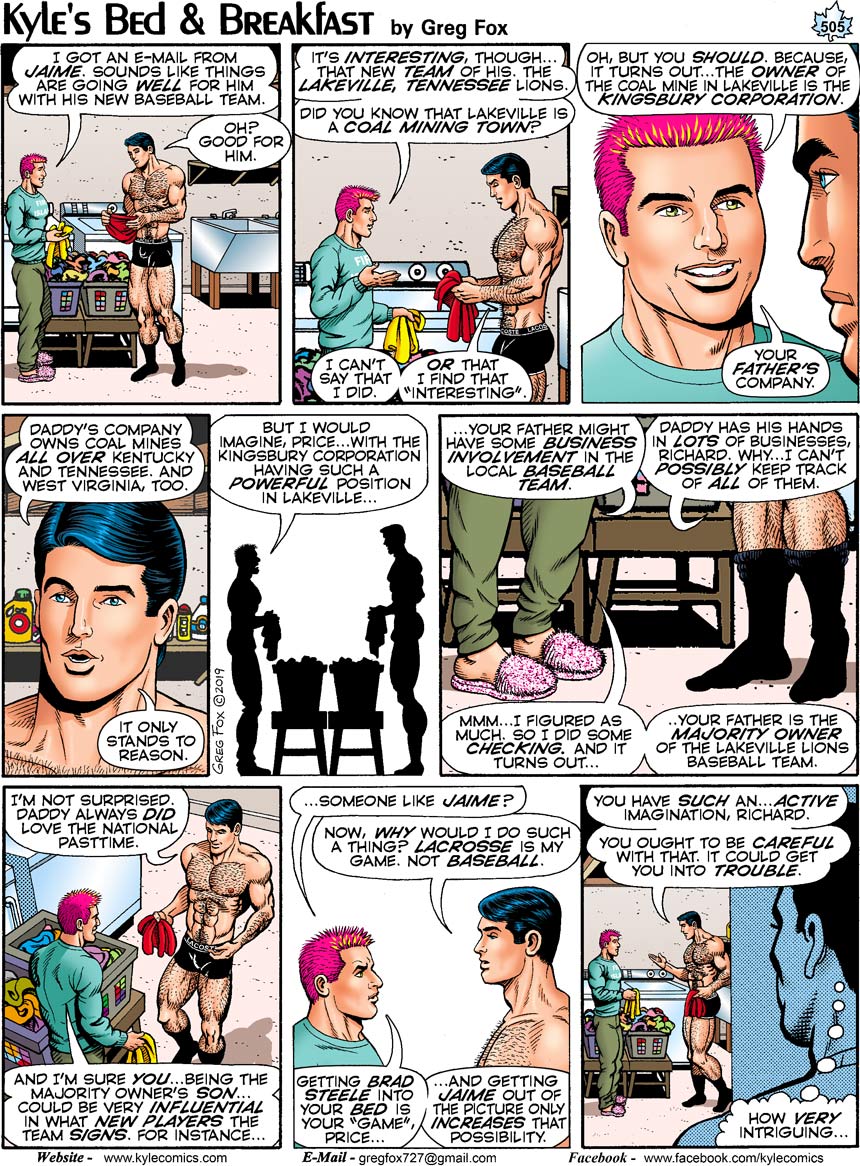 Was not expecting THAT! Nor the involvement of Lance into the thickening plot. Very intriguing indeed!

Wow! That was a very interesting development! But Greg Fox...you might have to edit the date of this issue--from January 1st 2018 to January 1st 2019! It's going to be very hard to remember in the next several days and weeks...I know! lol. But, you're still simply the best! I love your work! Happy New Year!!!

Jiminy crickets! I knew it! I had my own suspicions about Price!

First, I'm LOVING this more 'mature' acting Richard; No 'GIRLFRIEND!' talk here... he's stating (obviously) clear connections with a laser-like sensibility, and, to imply to Price that if he starts 'crossing' others again, he has something to work with...even with fuzzy slippers, he's showing us with age, comes WISDOM! ha-HAA!

NOW, onto Price; this is a SERIOUS setback for his character, because he's showing us that he hasn't earned Brad's (and the others') trust to show he's evolved from 'evil' wrongdoing, and it won't bode well for him if someone finds out, if he MAY have did this (...and, it looks to be Lance, from the shadow-y figure; who ELSE would say,'intriguing'?! It would be REAL cool if it WAS Breyer, @Michelle!) I still WHOLLY haven't forgiven him for the 'Kristian may be a Dope Dealer' setup...

I may hog the comment section later, with some character plot suggestions, so lemme nurse the hangover, so I can start ANOTHER one! : S .....ha-HAA, CHOW!!

drama coming onto our way folks.

on a VERY different subjet. the other guys, sorry I AM HORRIBLE with names, have been engaged since NEARLY MORE THAN 5 YEARS by now. are even going to see a wedding or something an not a 'days of our lives' show?
not that it's not cute but...some progress would be nice too.

@Karmakat: .that would be Dave & Nick, AND, that's where my plotline suggestions start...NOW! : )

DAVE: Dave meets a sexy Male Advertising client, who is interested in using him in a campaign, as someone who's gay and 'beat the odds', & wants to share Dave's story with the world. Nick (stubborn mule he is), thinks Dave should keep private (and AWAY from this guy), and it causes a rift in the relationship. Dave calls Nick out on the LOOONNNGG engagement, and Nick surprises Dave, telling him he only did it, because that's what DAVE wanted, not Nick! : O

Dave calls off the engagement (which shocks ALL), and stays with Kyle at the B&B briefly; only to be asked by the sexy client (who's at the B&B temporarily, invited by Lance), to move in with HIM!! Dave now starts to have some stirring feelings for the client, who sees the beautiful soul in Dave, and.....FINISH IT GREG! ha!

NICK: ..with Dave breaking off the engagement, Nick is DISTRAUGHT; he only said what he said to deflect the REAL reason...he's running out of money, and is about to lose the business! he's one of those PROUD Italians, and didn't want Dave to know, until he was secure again, for a STABLE financial marriage. Nick is also losing his apartment (above the shop), and is thinking of moving in with...BREYER, and to see if Brey could whisper to Kyle for a loan! Brey feels put on the spot, and....FINISH IT GREG! ha-HAA!!

BREYER: (...about TIME this boy gets a story again..) Brey is doing P/T work for Nick, and is now freaking out, because he may lose HIS place, AND his job, and feels he may lose Kyle's respect, from his constant job losses. Brey ALSO wants to marry Kyle,too, but seeing Nick & Dave's situation, is now causing an emotional disconnect with him & Kyle.

Kyle thinks it's the 'small penis' situation, and, 'wants to talk'. Breyer thinks Kyle wants to end the relationship, and quietly goes to Canada (visiting his Cher-looking Mom), to 'think'. But, actually, Kyle wants to propose Marriage to Breyer! Breyer prepares to come back the the U.S., but..IS NOT ALLOWED!! : o ...you see, he...FINISH IT GREG! ha-HAA!!

Interesting turn of events. I can't wait to see what happens next. Richard is the best "big brother"

Did I miss an update? Jamie's feelings for Brad literally were realized off-panel. Im confuzzled as to why.

And just the image of an almost naked Price with Richard right there next to him is total tease for me. They're meant to be together!!! Lol. *screams into the void*

But Richard's idea and his delivery here were rather delicious, and Lance overhearing, if nothing else, gives this thread an outside witness to do something interesting. And I like that this is a love game with not a very malicious tactic being proposed. Jamie would still end up with a dream come true for his career if Price pulls the trigger. And we know Price would have done something sociopathically nasty if left on his own, Richard does a service here, lmao.

Loved this. I'll be waiting for more.

Drive website traffic ''https://zarihz678.wixsite.com/seosolutionx'' Drive more traffic to your website has also initiated an ultimate SEO package. This package fits in the category of guaranteed quality package. This package provides everything that one could wish of. Our company’s major target is to serve small business owners.

greg, you have a troll in your comments offering to increase your blog hits, if only whatevs. i don't know a way to comment negatively, just to let you know.