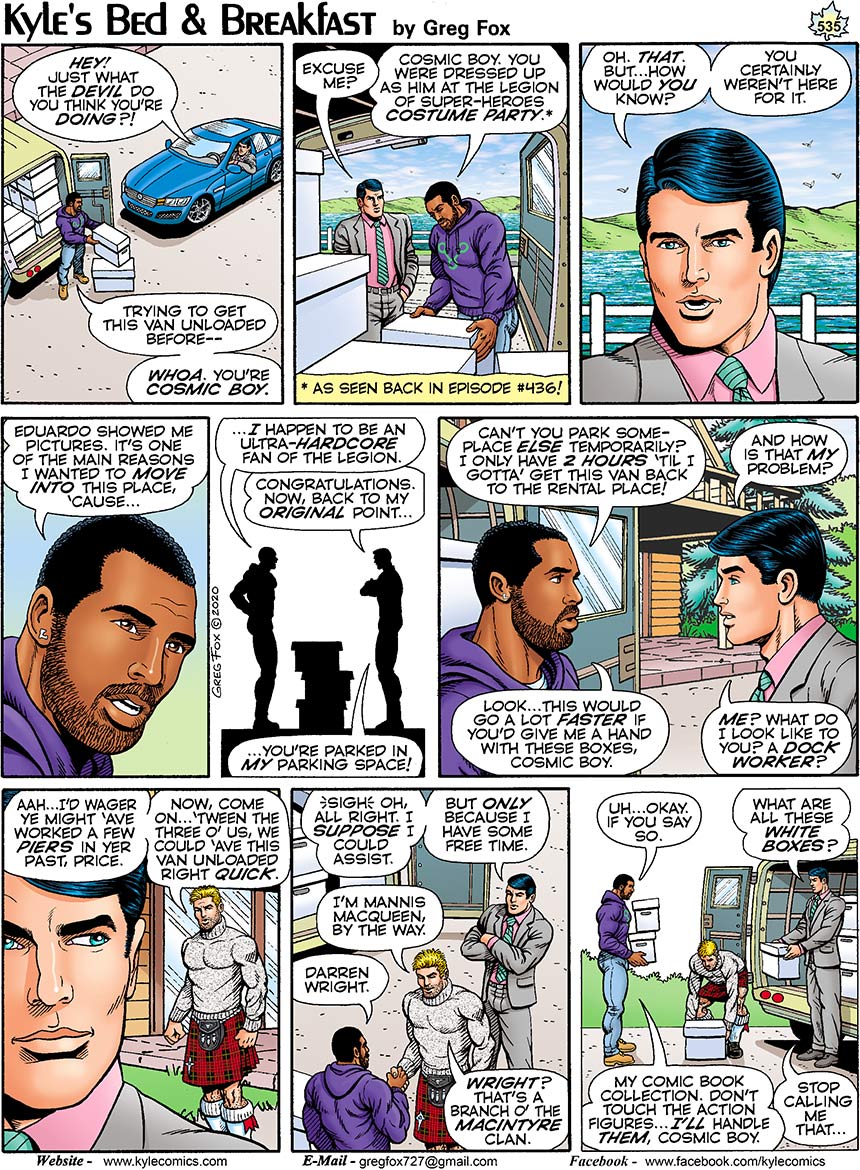 I am loving this "Cosmic Boy" label for Price.

...well, THIS is an interesting dynamic of characters, this episodic bi-week...

Price: ..usually mouthy, snippy, & condescending to many, at the B&B,seems to react to Darren's pointed directing with quick action; as if he is to OBEY...could Darren be the one, to hold the key to Price's romantic 'lock'!? I thought Ed(uardo) was more of a 'fit' for Darren, but with an ASS like Price's, I'm SURE he can, ummm, 'tame' those juicy cheeks,AND that flippy mouth, in the process... >sotospeak<

Darren: ...since his debut, he seems to have been shy, & a tad depressed; he barely opened up to Ed, but HERE, he seems to taken to put Price in his 'place' FAST, with the 'Cosmic Boy' comment....He is NOT scared of Price,which can work in his favor, in a romantic context...I'm liking this dynamic of these Two, it's bringing out more character definition in BOTH of them, and, s'kinda got a sexy 'lil vibe... ; )

Mannis: ...he's just here in this ep, for 'assistance', but, he seems to 'get' Darren fast; he can tell Darren knows how to hunker down & WORK, so he respects him outright, and, is clearly efficient, with the PRISTINE comic book collection; these Boys can clearly 'gang up' on Price if he gets 'mouthy' again at the B&B..BUTT, a muffled, sweaty lil' 3-way in the Laundry Room, with those 'lil black shorts around Prices' ankles, would UM, sor'im out, RIGHT QUICK, eh!? ....WELL, I guess my coffee kicked in, now....ha-HAAA!!!

A hoodie, a suit, and a kilt. I love this B&B. And I see some Legion events in our future. Where's Ultra Boy when you need some boxes moved?

Price may have met his match in so many ways!

RBS7079 and WranglerMan: For ONCE I agree with you two( UGH). It seems as if Price is taken with Darren and it seems as if Darren feels the same way. There is something in Price that wants to submit to Darren and the chemistry between the two MUCH MORE than Price and Brad. Interesting turn....FINALLY a story with some breadth in it (even though, I feel that Darren should be with Lance)....However, Mannis is just dull to me. In this episode, it looks as if he's intruding or "c-o.c-k blocking." Could he be interested in Darren too...? Hmmm, interesting. Very interesting....

Mannis needs to start wearing JUST the kilt around the BnB

"MacQueen"? Oh, Greg, you really are too obvious.

I want to second (third? fourth?) the praise for the unusual combination of characters. They really come alive when they're removed from their comfort zones of familiar dyads and triads.

Darren definitely seems taken with Price (or at least Price as Cosmic Boy). He better watch out or Price will use him as a way to make Brad jealous. I don't want to see someone that innocent manipulated. He's just so cute and nerdy.

I wanted to see what could possibly develop between Darren and Ed. I'm also still interested it what is happening with Drew and Lance's relationship. I guess I'll have to be patient.

Typo. Should have said "in" not it. Lol.

I would rather see Darren with Ed than Price. But I would rather see Lance with Matt or Darren or Kristian than Drew. Although, the pairing of Drew and Lance has been kinda going strong, I would prefer to see him with a black or latin or Asian guy. Darren and Price are interesting but let's face it, Price comes from the south and that's where majority of the racism is at. He will not see Darren as anything more than a fetish (sound familiar?)