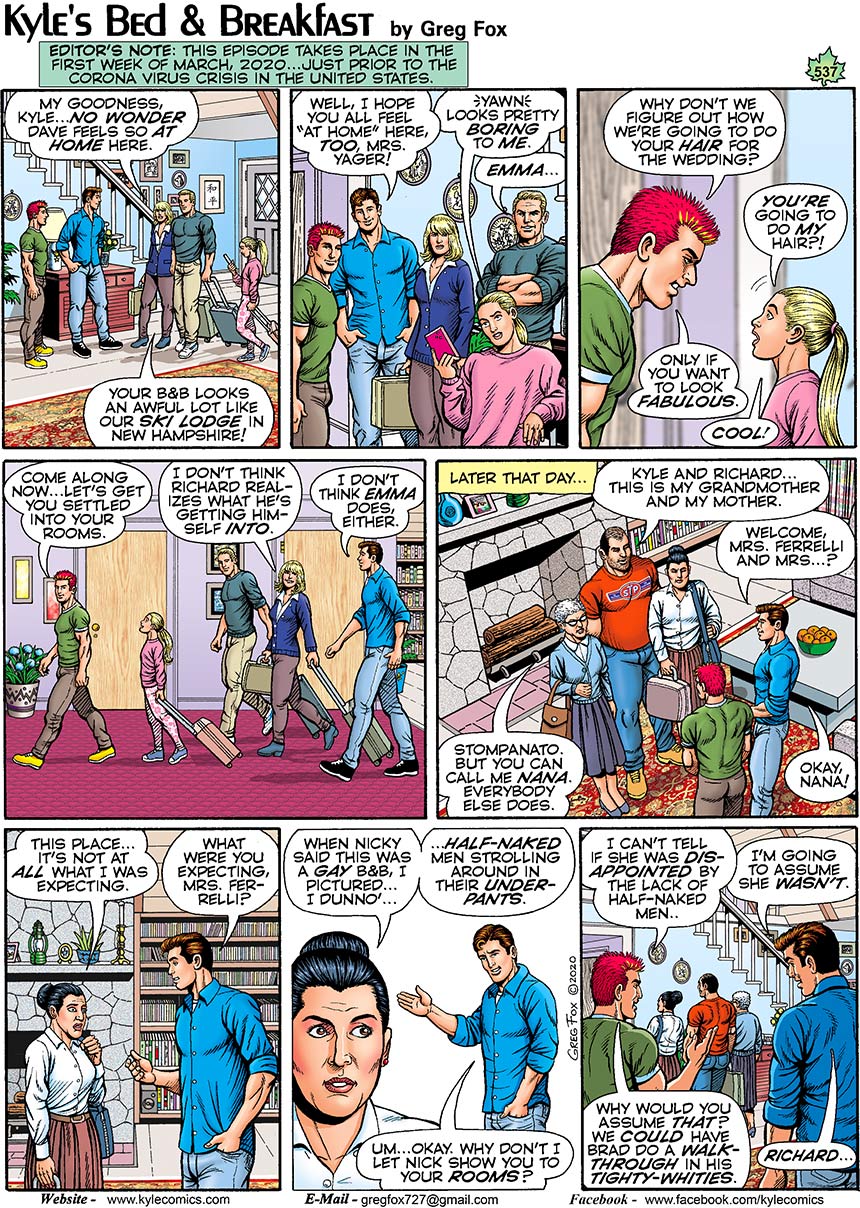 Yay, Kyle's back in the strip!

As we all know, this pandemic that most of the World is aware of, has numerous People on edge, feeling anxious, and very uncertain about the future; We as a race have become susceptible to a virus that has reached our shores, and has caused considerable fear....But, NOT at 'Kyles Bed & Breakfast'.

I don't speak for the Artist Greg Fox, but I'm sure he would like to continue the strip with little mention about the virus, unless he feels the need to incorporate it in the storyline(s), for 'realistic' intent; I just hope we as readers do not think Sir Fox is not being indifferent to this epidemic, but to see this as Fiction for entertainment,so We can still come to "Kyle's" to escape from this reality We are experiencing, just to 'breathe', & regroup.....

I wholeheartedly agree. It's up to Greg, of course, but if Kyle's BnB exists in a magical dimension where coronavirus doesn't exist, then I'm perfectly happy.

Also, it's fun to meet the family. Mrs. Ferrelli seems to have an uncanny sense of how the BnB works already. :)

Dear Greg: Please end this storyline. It is dumb. That's all....

Well, ciao, everyone! I hope that certain people (and he knows who he is) will take notice of the correct spelling of "ciao" and remember it has nothing to do with Chinese take-out--especially since there are now Italians at the B & B.

Oh, Greg, why did you have to have the Ferrellis over? They remind me too much of my family: coldly homophobic and snickering at what they think they know about gay men's sex life. It brought back memories like when they tried to get me on the couch as soon as my boyfriends left. Love never had a chance!

Anyway, keep writing and drawing as you are the rock we cling to in this plague-world which we are now living in (as if Trump and Pence weren"t enough).

And Jack, in case you're tuning in, bear in mind that Greg is here to charm us and not the critics--or people who think they are critics. Here's a genuine Italian blessing for you from a genuine Italian:

You're lucky I didn't use the Sicilian version of that as it involves wet cement.

A dopo, ragazzi
(this has nothing to do with dopes BTW)

Well, Kyle is certainly looking good in that blue shirt. Buttons become him.

I CERTAINLY hope you're not going to waste the golden opportunity to have Nick's mom catch Brad in his tighty-whities, Greg!

Our resident watchdog has really been falling down on his troll-catching duties lately.

I can see that the lead up to the wedding is going to be fun. So many different personality types colliding. I think that Richard can handle all of them.

..Hey, all, I'm having a bit of Cabin Fever this Morning (although I work at Home); while me coffee is brewin', I thought I'd address the origin of my sign-off, 'Chow', which has NOTHING to do with Asian delicatessens, for those concerned...I've addressed it before, but never went into detail:

..My first Boyfriend (a visitor from New Zealand) and I were watching a VHS tape of 'Valley Of The Dolls', and we saw a trailer for a 1967 flick called "Fathom" starring Raquel Welch, which featured this HOT Italian Man named Tony Franciosa...In the trailer, they showed a shot of Raquel in a Green Bikini, & the announcer said, 'feast your eyes on Fathom...' and I said, 'I'd rather 'chow' on Tony...' which gave my NZ Boyfriend a HUGE laugh....

He couldn't stay in the US (couldn't get a Work Visa extension),and had to go back to NZ in '93, and I was GUTTED; I started writing him Air Mailed letters, and he ended HIS letters with, 'Ciao, Kiss U /Kiss Me' and I wrote VERY LONG letters, so I referenced 'Fathom' & ended MINE with, '...feast on this (my letter), CHOW!'

It's just 'my' way of keeping My Old Boyfriend in memory (we drifted apart after 1998), and, a way for the commenters HERE, to 'feast' on my silly comments....BELIEVE me, with my horniness for Italian Men, I KNOW how to spell 'Ciao', BUTT, I don't want them to GO! ...ha-HAA! >ItaliansdoITbetter< / >andIhopetheyGETbetter:(<

First of all, I am not worried about your "cement boots." Since you like sprouting foreign languages, here one from me: Calla.....No one is saying that Greg doesn't occasionally write something decent but let's face it: the one REAL couple is Lance and Drew, eventhough I can't stand Drew and want him with either Matt, Darren, Kristian or even Eduardo...I think that this wedding is a mistake because Ferreli's "fiancée" would invite his homophobic family to a "joyous" event eventhough, Ferrelli was against it.

I sometimes wonder why all the negativity and criticism in the comments section of a relatively specialized comic strip on the internet. I mean, what's the point of tearing each other down when we're all fans of the same thing and, frankly, when the whole world is falling apart around us?

But then I realized that this comments section is a lot like the strip itself: a small group of gay men (mostly) who are in this together, even if that means that some of them are sometimes bitchy and contrary. And I kind of love it. Greg seems to have nailed that dynamic one strip after another.

Without irony, I'm glad we can all meet here and be ourselves during this difficult time. I appreciate all of you.

Stay SAFE, and sweet (without Irony),