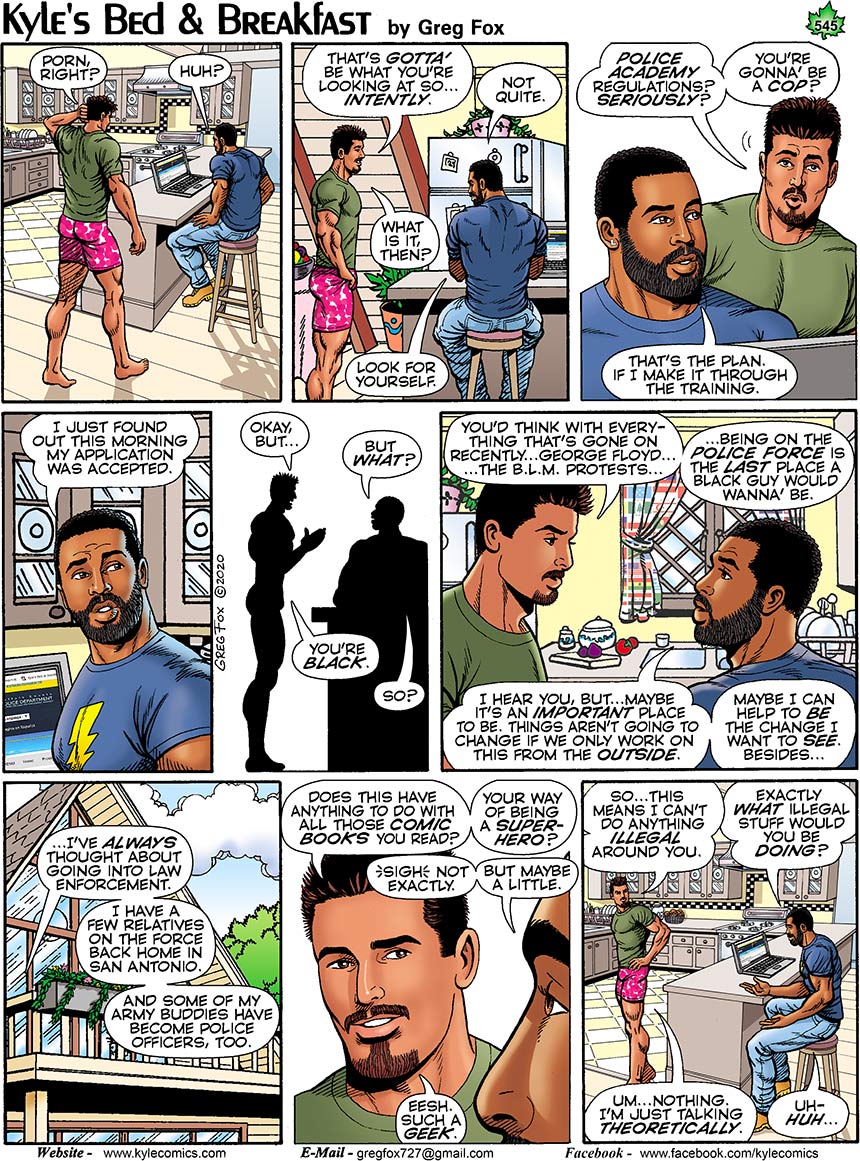 FIRST -...well, Hello, Eduardo, s'nice to see YOU (looking like you),again! ...ha-HAAA!! ..this is what Ed should look like, 'updated' (panel 8 shows it well); Now, let's get some storylines for him happenin', he's TOO interesting to be 'answering the front door'...

SECOND - Darren: ...I know a LOT of Ebony Men who've gone into Police enforcement, and excelled through adversity,gumption, & yes, inbred racism within the Force, but, I think this would be GREAT for Darren; he is a (relatively) openly Gay Black Man, who has decent morals, a calm though process, & a determination to CREATE change, within Law Enforcement...,This could be something topical that can be added to THIS characters' plot-lines...I see it...

...It ALSO would've been nice to 'see' Ed in those sexy Black bikini briefs he used to favor! ...I may have the coffee in my system, but I need a 'lil vitamin "D", TOO, y'know!! ...ha-HAAAA!! >WrangknowswhatImtalkinbout<

I remember watching a talk show and one of the "experts" stated gay men just weren't cut out to be police officers. During phone-in a police officer said he owed his life to his gay partner.

Nothing so beautiful as a bigot with egg on his face.

I've had my coffee and Eduardo stirs it anew looking so pretty in pink! I had plenty of Vitamin D in my yogurt and cheese this morning, And Eduardo's muscular hindquarters and Darren's beard are pumping up the T levels for me! 😍

But I really want to see Darren out of that denim! Bikini briefs...or a jockstrap...would do nicely on him.

I'm glad too that Darren is entering the Police Academy. I prefer building bridges to building walls or demolishing edifices.

Is this the Latino character? I can’t remember his name but he was my favorite. This guy looks more buff.

I am always deeply suspicious of anyone drawn to law enforcement.

'...Eduardo's muscular hindquarters and Darren's beard are pumping up the T levels for me!..'

I've been wondering about the "Eduardo doesn't look like Eduardo" fuss in previous episode comments was about but I see it now. I think a lot of it is that Eduardo has matured - not only in personality but physically as well. So the changes are welcome. Wish we could see his unique tattoo though.

As always, Greg, enjoying the ongoing saga of the BnB. Thank you for your meticulous artistry!

...hey, Behr-Behr! ..THANK YOU, Bubby, I thought it was only ME! ...he now has brownish highlights, thicker 'cropped' follicles, more facial hair, & a bigger build; He originally had THE most 'distinct' look of the whole cast (the jet-black, spiky cropped cut was VERY distinct), but it was VERY wavy, brown & thick, when he 'premiered' to paint Darren's Aunt's Home....THAT was what shocked me...

He HAS matured, and, is a VERY interesting character who has overcome some SERIOUS burdens; he 'matured' NOTICEABLY, when he was with Jake....THAT'S when I wanted to see him blossom, GRADUATE from College, and face the WORLD (the 'cartoon' world)....and, I miss the unique tattoo, TOO!! ...ha-HAAA!!

Historically, law enforcement was created to track the escaped slaves. And it evolves into the type of police that we are having as of today. Since 9/11, the citizens poured its money, weapons, resources and everything - enough to militarize the police departments. These days, the law enforcement agencies goes out to terrorize people, innocent or not, without impunity. And rarely get prosecuted nor disciplined for that. Good cops protect the bad cops - hence the blue wall of silence. Back the Blue/Blue Lives Matter is just another example of police arrogance upon BLM and so on.

And here, we have Greg Fox, a white storyteller talking about putting the BIPOC in to make a difference for within? Really?

Sorry, I love you, Greg but this is BS.