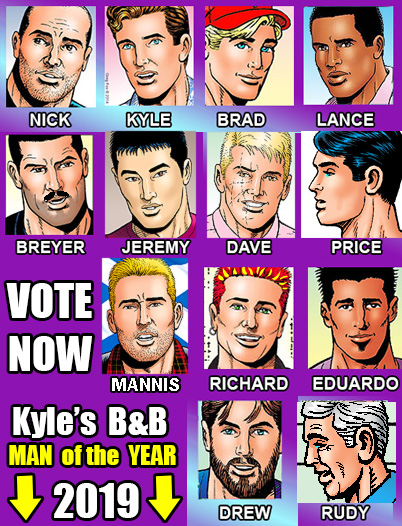 It's that time of the year again! Time to pick the guy who you think was
the star player in the story-lines of Kyle's B&B this year! Keep
in mind, this shouldn't necessarily be about voting for your favorite
character, (although you can, if you want to). Ideally, this poll should be about voting for the character who really had a groundbreaking year in the B&B stories.
Voting ends on Sunday, December 29 at  6:00 pm EST. Winner will be announced and the crowning ceremony will commence an  hour later, at
7:00 pm EST. You can only vote once, so think carefully about your vote!

To cast your vote, scroll down and you'll see the poll options. Pick your
guy and vote!

(Please note.... if you don't see your
vote tallied after you place your vote,
don't worry.... you just need to refresh
your browser's page after your vote has
been placed to see it reflected in the
totals). PS.... in years past, for some
viewers the poll did not show up on
their screen. It seems to not show up
on some mobile  devices. If you can
get to a desktop or laptop, that may
work for you.  And if you don't have
access to either of those devices,
you can e-mail me your vote privately
and I will add it to the totals). Email me at

Who is your pick for the Kyle's Bed and Breakfast Man of the Year for 2019?
Created with PollMaker
Posted by Greg Fox at 7:00 AM

- MANNIS & JEREMY; gets involved with Jeremy, Jeremy won't let him 'go there' (NIA),and, makes up a 'secret fetish' that everyone (except US)knew about, and then, decides to 'take it slow' with Jeremy by way of frottage.....THAT'S IT.😑

- RICHARD; VERY present, this year, with a 'nicer' demeanor; nothing of interest in his personal life, tho...he NEEDS a storyline,again, for 'fleshing out' purposes....maybe a call from Kristian?!?

- BRAD; dealt with Price's betrayal of sending Jaime away, accepting Jaime's gone off with 'Abigail' (yuk), and dealing with his Dad's trophy returning / un-acceptance of his Homosexuality...he had a LOT on his plate, again...looks to be the Winner, here...

- NICK & DAVE; ..about TIME, with the wedding nuptials, but that started in OCTOBER! ...but, this was DAVE'S most 'featured' year, in awhile....maybe he won't be at the bottom of the polls, again!? 🤔

- PRICE; ..the 'Divo' had a sweet moment in the summer, helping out Dave, but, he laid low for most of the year, mostly because of Brad finding out about Jaime's dismissal..we need him back, tho...a DIVO must be seen and HEARD!!!...ha-HAA!! >especiallywiththosetitstoo<

- RUDY / BREYER / KYLE; ....all showed UP, but didn't show OUT; no storyline features WHATSOEVER...we need SOME update on Kyles' relationship with Breyer; He's a masculine, interesting Man, and is almost nonexistent in the strip, now...a 'breakup' would bring MUY interest, to both characters in 2020, tho...

...and, I do find it AMAZING that SERGEI is featured in the Holiday header of the strip, and STILL hasn't been brought back to the B&B!!
make that HAPPEN, Greg!! ...ha-HAA!! >russianbearsneedluvtoo<

...so, whaddya thinks, Kids!? ...I'll keep an eye on your polls..and, another on Prices' ASS!!🍑🤭 >juicyasseddivosneedluvtoo<

I don't usually respond to your posts but here goes:

Mannis/Jeremy: THE worst couple that I have seen in this strip in a long time. UGH. Both of them are just....clods meandering around.

Drew: Interesting to a degree. The ONLY man who got Lance to make a commitment deserves more.

Richard: THE most annoying character here but...he needs a life of his own. Kristian was the answer to that but like most of the minorities...they disappear. I swear this is beginning to like that no talent artist Josman.

Brad: The very definition of a dumb blond. He has it the easiest here and he still acts like a buff girl in panties.

Eduardo: VERY interesting character to me. Sexy as all get out too. It sure would be nice to see him actually get something decent for a change instead of being portrayed as a latin party boy

Nick/Dave: I don't like Dave. He is a control freak in a wheelchair. He wants it his way or no way

Lance: When will we see him and Drew meet their families? When will his character be explored more in-depth. We are tired of seeing someone like Brad get all of the attention.

Rudy/Breyer/Kyle: Three of the most underused characters! Rudy-when will he find a guy to date? Breyer-when will he ever go back fully to the strip (even if he's small down there) Kyle: when will he actually get a decent storyline again...?

I would like to see Sergei hook up with Matt! THat would be sooooo hot. Just PLEASE don't bring Jake back. Where's Jeff? Morgan?

...I (as is you), have been viewing the strip for quite some time now; I look forward to the twists & changes with the B&B characters, with glee (and, honestly, at times, frustration), in regards to the character development & growth...I LOVE to read what others have to say about the characters, plot-wists, relationships, etc...

I respect your view(s) in regards to wanting more racial diversification & interpersonal relations with AA Men & Women..and, I think out of MANY Gay Artists out there, Greg Fox has done a terrific Job. MANY others don't acknowledge it at ALL, so I've always liked the fact there have been a RAINBOW of diverse humans at the "B&B"...does he hit it, 99.9% of the time!? ..no, but, I ain't knockin' him; I dig what I see....

Lance has been a CONSTANT in the strip, as is Delia, Kristian was a BEAUTIFUL soul, and, although Matt (long gone), is still featured in the ads for "K's B&B"...I wouldn't necessarily say most of the characters are 'clods' / 'control freaks' / etc., but I enjoy them nonetheless, because, regardless of race, status, ethnicity...I still like MAN TIT'S n' ASS!! ..ha-HAA!! >yeahImadirtyolmansowhat<

Everyone will always have their say as to who they like, what they want, who should be featured, etc., but Greg Fox has been making me happy for QUITE the time, and, I look forward to Darren's forthcoming involvement with Eduardo (..if, that IS Eduardo...who dat!? ha-HAA!!)AND, to whatever Greg feels is right for the plots of the characters....Kudos Greg!

MANNIS is getting the lead, now, so even though he wasn't my cup O' Kilt.....I voted for HIM...He may be a dirty Blonde, but he's still DIRTY!! ...ha-HAA!! >easyaccesswiththekilttoo<

SOME agreement is good I guess. Really. I don't think that I will ever be in full agreement. I have missed some of the issues and had to go back and re-read them.

However, Yes we need more racial diversification and such because the gay community as a whole is white-washed and the contributions to gay society that minority gays have contributed are either being snuffed out of not acknowledged or ideas stolen. For example, see Stonewall, it happened there greatly. I'm just saying.

Lance is the ONLY minority that is gay and is a constant. But his storyline and lack of exploration is nerving especially when a nitwit like Brad is concerned. I LOVED Delia. SHe was great!!! But again, no girfriend and lack of depth or exploration. Kristian should've been a MAIN character. He was THE most beautiful man in the house! PERIOD. Matt is long gone.

Darren and Eduardo has potential for a great storyline but they too will be relegated to the backburner in favor of another stupid Brad/Price storyline.

Mannis/Jeremy: I'm sorry but I didn't like either one of them so they cancel each other out. I miss Morgan though. I agree that Jeremy can walk into traffic. His character is just terrible. He was the worst character that I have seen in the strip. PERIOD and he's ANNOYING as all get out. I did vote though. I voted for Lance because we have not seen his character really be explored and we also have not seen a minority gay man win this so-called "Man of The Year" award yet.

OH! ,and Greg, do we see an 'Angel' being bestowed upon us, soon!?
Tight Jeans n' ponytails do a libido GOOD! ...ha-HAAAA! >IliketheLevis<

I come once for the strip, but I keep coming for the comments section.

I AM getting heavy about it because this is something that should be celebrated. Shouldn't ALL colors of the rainbow be celebrated and not just a select few?...However, I would like to see the Angel make an appearance.