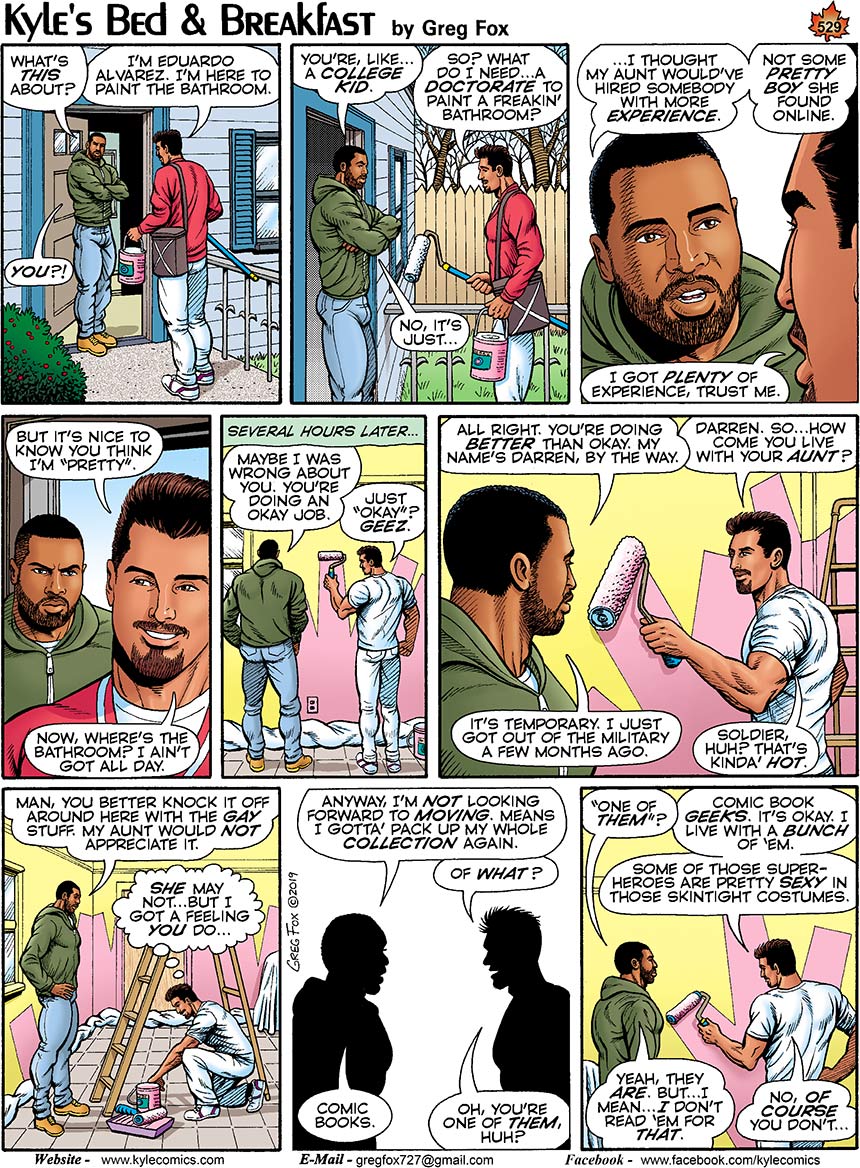 I see that probably will be the beginning of a new story...

2. ...hmmmm, Darren...Matthias was the only POC that had a long-lasting resonance with the "Kyle's.." audience, so it will be VERY interesting to see what he has to offer here....He's coming off like a cartoon Ice Cube to me, aaaaaaand...I find it a mite unbelievable, that they would have such 'snippy' convo when JUST meeting; not ALL Black Men announce their sexuality to the PAINTER they just met, so... I'll give it a pass, for 'intro' storyline purposes...he betta have a booty under that hoody, tho....ha-HAA!! 🍑 >donthitmegreg<

3. Interracial relations at the B&B; ...HMMMM, not many had there (as I said before, Matthias was the BEST POC ever, in the strip..moreso than LANCE!) So it IS nice to see the 'diversity' of it all...but, I ask THIS...pleasse, don't it another 'closeted brotha' thing; I get a tad weary with heavy-handed narratives at the B&B, yet, it IS 2019... but, if it give us another 'spin' about the 'closet', I'm all for it...

....maybe Darren's NOT so 'closeted' as it seems....a PINK LIVINGROOM!? ...and, Eduardo betta show his 'strokes' in the BEDROOM to Darren FAST, because he's doing a TERRIBLE job with the ones on those WALLS!! ...ha-HAAA!!🤦🏾‍♂️🤬

I will say this: It's good seeing another POC on here. However, I have some questions: (1) why is it that the POC gay men are always over-dressed and the white gay men get to show off their bodies? I mean come on....I have only seen Lance in bed once with Drew and to be honest, he's hotter than any guy in Kyle's strip EXCEPT for Kristian (another interesting POC). (2) Why is it that the POC always seem to "disappear" and are not the norm? If a loser/user like Price can appear regularly after what he's done then why not Matt or Kristian?. I mean we are tired of the fake feigned angst of Brad coming out!...That being said: this COULD be an interesting storyline and possible get together for Eduardo and it seems as if he likes black men, which is fine but let's make it more spicy instead of neutered.

However, I'll say this: IT'S ABOUT TIME because the gay community can not expect POC gays to support them if there is no real representation and I'll leave it at that

Send Eduardo over to my house...Woof!!

Hello, Kyle. As always, good plot development--by that I mean many possibilities available:

3. Conflict? i.e., possibly vicious aunt who keeps Bible next to her hydroponic collard greens. I'm not being racist, my Italian grandfather used to grow them.

And Kyle, don't you just LOVE people who tell you how to write? (I won't name names (Ha, ha, chow!)

EDUARDO: Yeah, well so was Spiderman.

You can name me. I DID state that we need more POC gay people and that the POC gay people usually disappear in the strip. How is that "telling someone how to write?" These are only suggestions and it's up to Greg to put what he wants but one thing is for certain: the storyline between Brad/Price is old. VERY old and dated. There are other plotlines such as: (1) Will Kristian ever come back and kick it with Richard? (2) When will we see Lance or Drew's family meet each other? (3) Where's Matt? Jeff? Morgan? A love story featuring Rudy? All of these characters are FAR more interesting than Brad, Price. Heck, I'd even settle fore Breyer eventhough he's *ahem* lacking in certain areas.

P.S. I am glad that Greg got rid of that solicitor! UGH

I was referring to myself, Jacqueline. You needn't be so touchy. That was a humorous reference to myself. People do that all the time.

@Nicholas: you actually made me laugh at "Jacqueline." Lmfao!!! Good one. You are correct, humor is great...

Good Jack. Now that we've gotten that out of the way, let's go on a date and show these guys at the B & B how it's really done.