A Behind-the-Scenes Look at Self-Censorship

Came across this recently, and found it kind of amusing. In Kyle's B&B Episode # 145, (the episode where Kyle & Breyer finally have sex for the first time), when I got to drawing the final panel, I had second thoughts about just how much to show of Breyer's....um.... I guess we'll call it the "pubic area". So, I ended up creating 2 versions of the episode, which I'm showing you now, here for the first time! The original, uncensored one is on the top, and the censored, ("oh, he still has his underwear on" one is on the bottom.

Why would I have bothered with this? Well...perhaps because of the problems I encountered a couple of years earlier with a shall-remain-nameless Nashville, Tennessee-based gay newspaper. You see, in an earlier episode, (# 102), when Brad & Vincenzo have sex for the first time, there was a little rear nudity shown, (although no frontal), and a general "steaminess" to the episode. This Nashville, Tennessee-based gay newspaper ran the episode, received a few complaints from readers, and promptly dropped the strip. (Thanks, guys....um, maybe you could've just not run that episode to begin with, instead of running it and then dropping the strip when a few readers react negatively. Oh, but I digress). In any case, I was a little nervous about losing another paper because of such a thing. Hence, my "cover-up" of Breyer's manly pubic zone. However, in the end, I decided to go with the original...it seemed silly to be censoring something that shows, at the very most, a little sliver of the base of Breyer's penis. And you know what? No one complained!
Posted by Greg Fox at 3:07 AM 7 comments: 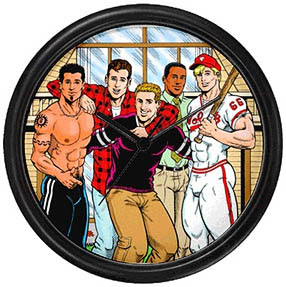 Or, maybe it's half-past Brad? Or, a quarter to Lance? (Looks like, right now, according to the clock in the graphic shown here, it's ten after Eduardo! Or, is that Eduardo:10 ?). In any case, just wanted to let you know about the latest in Kyle's B&B merchandise .... this handsome wall clock, sure to liven up any room, is now available to order! If you'd like to have your very own Kyle's B&B clock, you can go directly to the purchase page by clicking here. Telling time was never quite so... enticing!
Posted by Greg Fox at 5:38 AM 2 comments:

Or, do a 1-time donation to help keep the pancakes griddlin' at Kyle's B&B!