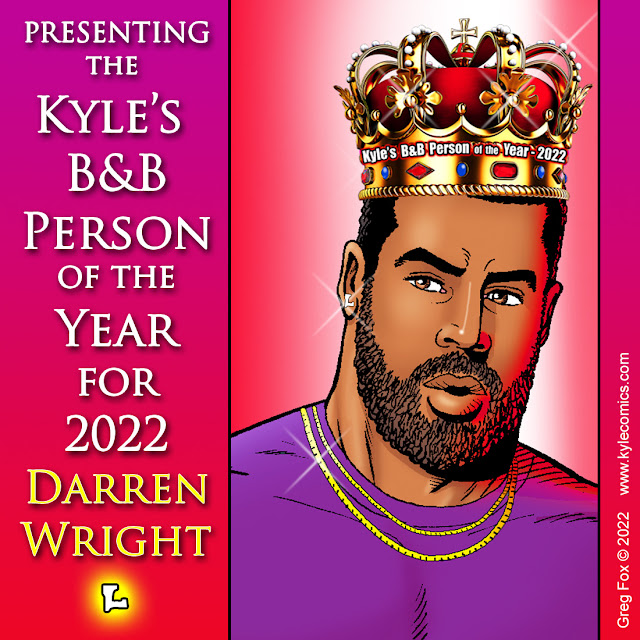 The votes are in, and it is official! Darren has won the crown in a decisive victory! 👑
This is Darren's first win, (he placed 3rd last year, and 7th in the year prior. So, it would
appear that his popularity has increased with each year he's been at the B&B!). It certainly
helped that he had some major storylines this year... starting out 2022 with a bit of a
dating mish-mash. First, an ill-timed outing with Brad... and then a not very happy time
with Eduardo at Spartacus.
But things turned around in the summer, as Eduardo and he drew closer, and had a wonderful
and very memorable date on Fire Island. There was also a cosplay trip to the hospital to visit
some sick children that Darren was a key player in, (and which gave him an opportunity to dress
up as Invisible Kid 2!). Darren also was there with Rudy when the idea of Rudy's kilt shop
enterprise was first sprung! And finally, after quite a build-up, Darren & Eduardo spent their
first night together, in a rather scorching episode folks are still talking about!
Here are a few highlight panels from Darren's life in 2022:

In looking at the numbers for the other candidates, the big surprising news is that there was a literal tie
for 2nd place!!! Both Mannis (winner for the previous 3 years), and newcomer Levi had an equal
number of votes.  I know that it was stated that in the unlikely event there was a tie for 1st place, the
winner would be decided in a run-off election by the Kyle's B&B Patreon Supporters. So, perhaps
we'll have a run-off election on the Patreon page for the 2nd place winner! (Speaking of that, Mannis
may have an advantage in that election... as he went full-frontal several times this past year on the
Patreon page. And if that sounds like a heckuva' plug for you to become a supporter on the Patreon
page, well... it was! And here's a link to check it out:  Kyle's B&B on Patreon).
Other candidates who had a respectable showing were Rudy, Price, Kyle and Eduardo. In a bit of a
surprise, former winners Drew & Brad only placed in a middling 8th and 9th place. (To be fair, Drew
only showed up in 5 episodes this year... and had speaking roles in only 3 of those). Brad was around a
bit more... often in his briefs... but that didn't translate into much voter support for him this time.
A special sad trombone award 📯 goes to our last place winner, Lisa. Considering that she had hardly
any screen time in the strip this year, it's understandable. Perhaps if things between Delia and her heat
up in 2023, she'll fare better in the next election. Stay tuned!!!
Below are the final numbers for everyone. And if you'd like to see the "Hall of Fame" of previous
winners of the crown, you can click here to visit the Kyle's B&B Person of the Year Hall of Fame!!!
As I always say... if your favorite guy or gal didn't win... start campaigning now for them! There's
always next year!!!  👑 I'm wishing you a very Happy New Year, and looking forward to bringing
you more adventures of the B&B crew in 2023! Thank you for being a part of it!!! 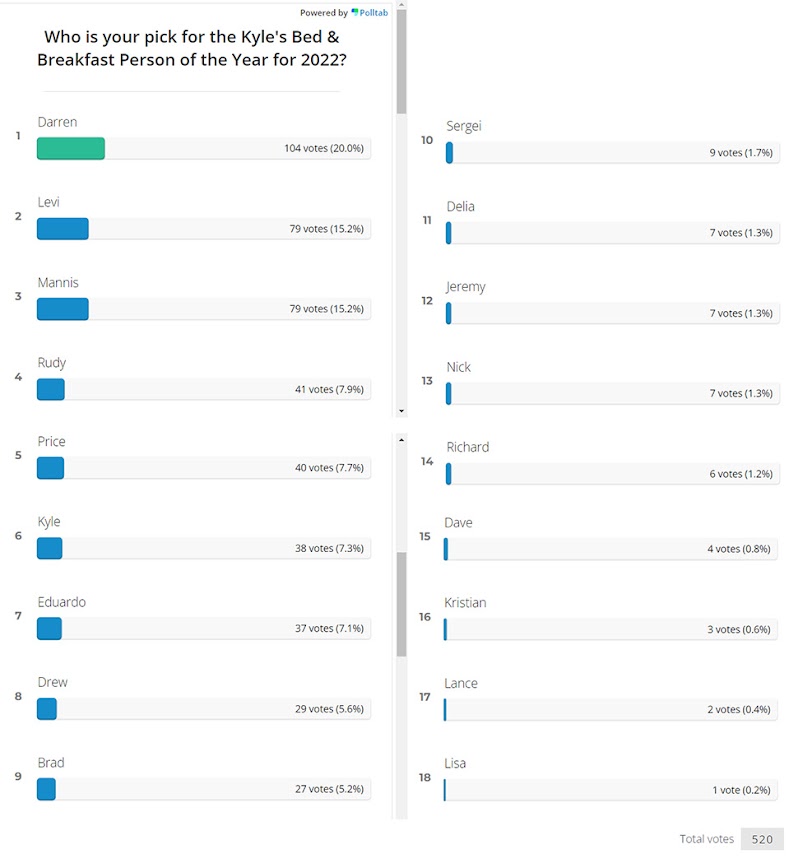 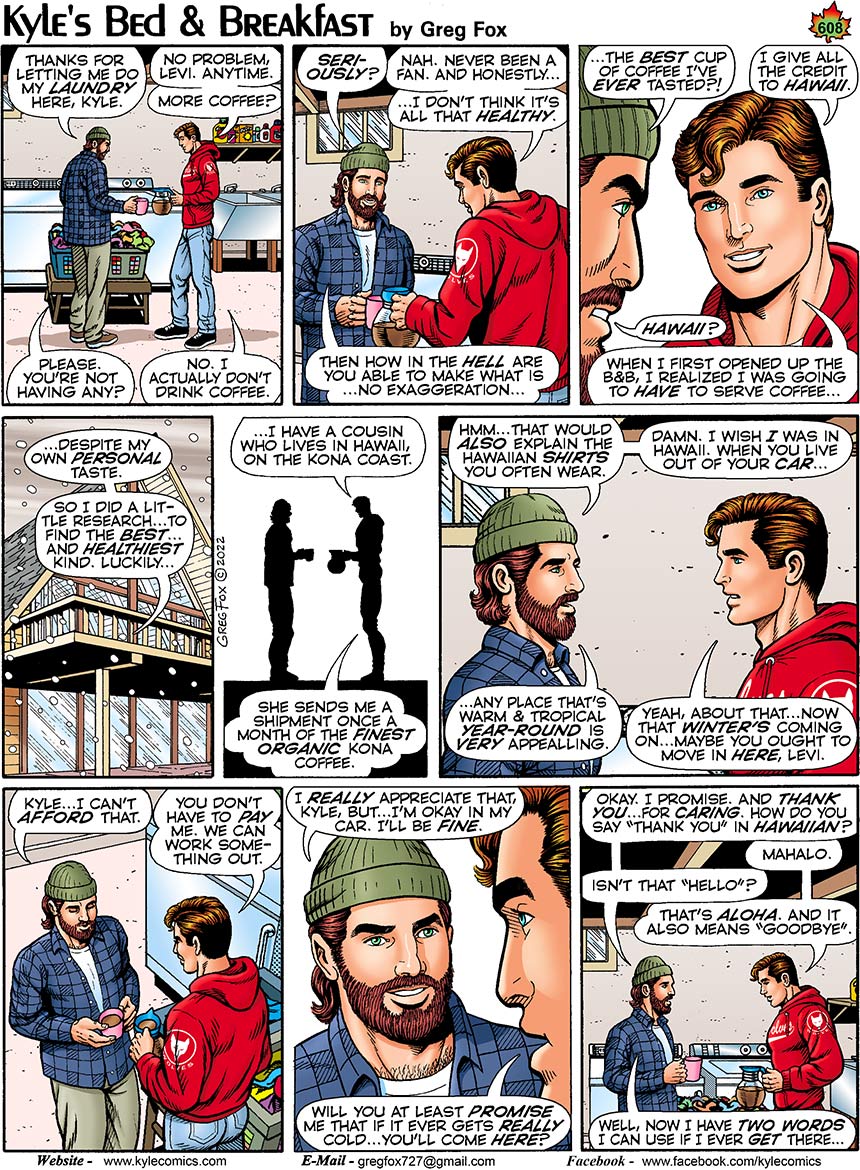 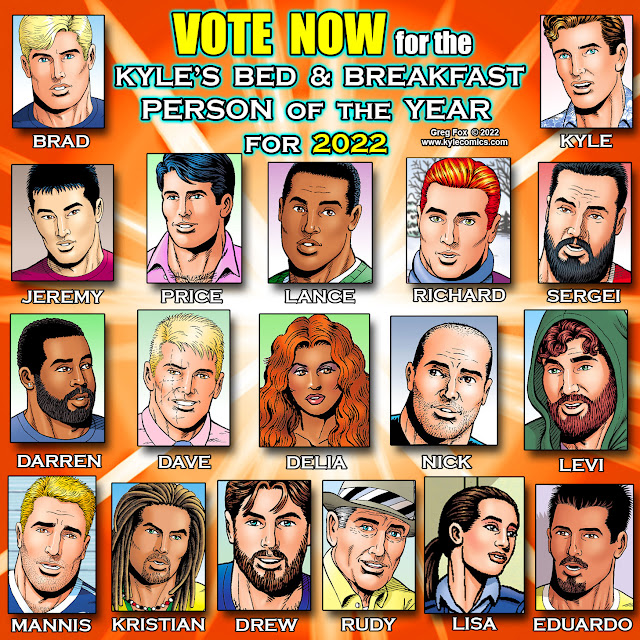 Who do you think was the star-player in the storylines of the B&B this year? Keep
in mind, this shouldn't necessarily be about voting for your favorite character, (although
you can, if you want to). Ideally, this poll should be about voting for the character who
really had a groundbreaking year in the B&B stories.
Voting ends on Friday, December 30th at  5:00 pm EST. Winner will be announced
and the crowning ceremony will commence later on that evening. You can only vote
once, so think carefully about your vote! (As always, in the unlikely event of a tie, or
if the poll is somehow compromised, the winner will be determined in a separate poll on the
Kyle's B&B Patreon supporters page).
To cast your vote, scroll down and you'll see the poll options. Pick your person and vote!
(Please note.... if you don't see your vote tallied after you place your vote, don't worry....
you just need to refresh your browser's page after your vote has been placed to see it reflected
in the totals). In years past, for some viewers the poll did not show up on their screen. It seems
to not show up on some mobile  devices. If you can get to a desktop or laptop, that may work
for you.  And if you don't have access to either of those devices, you can e-mail me your vote privately
and I will add it to the totals). Email me at 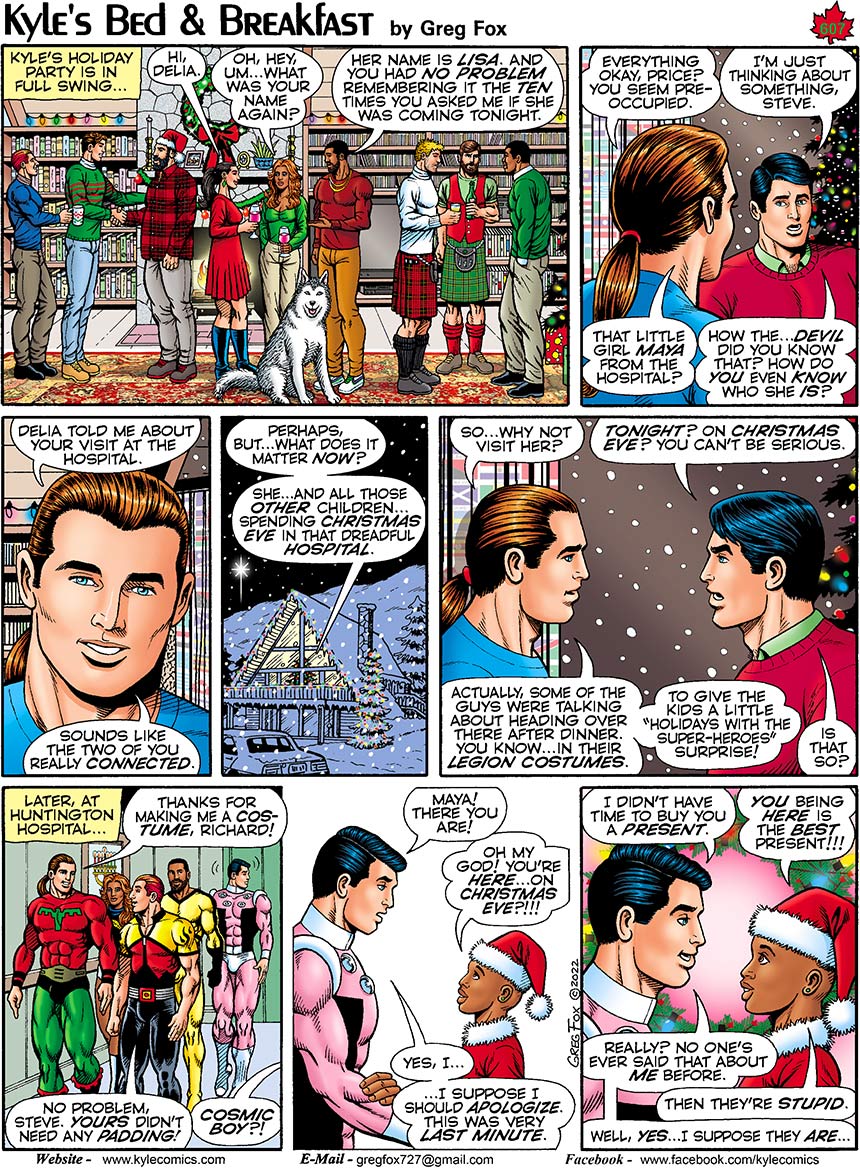 Or, do a 1-time donation to help keep the pancakes griddlin' at Kyle's B&B!