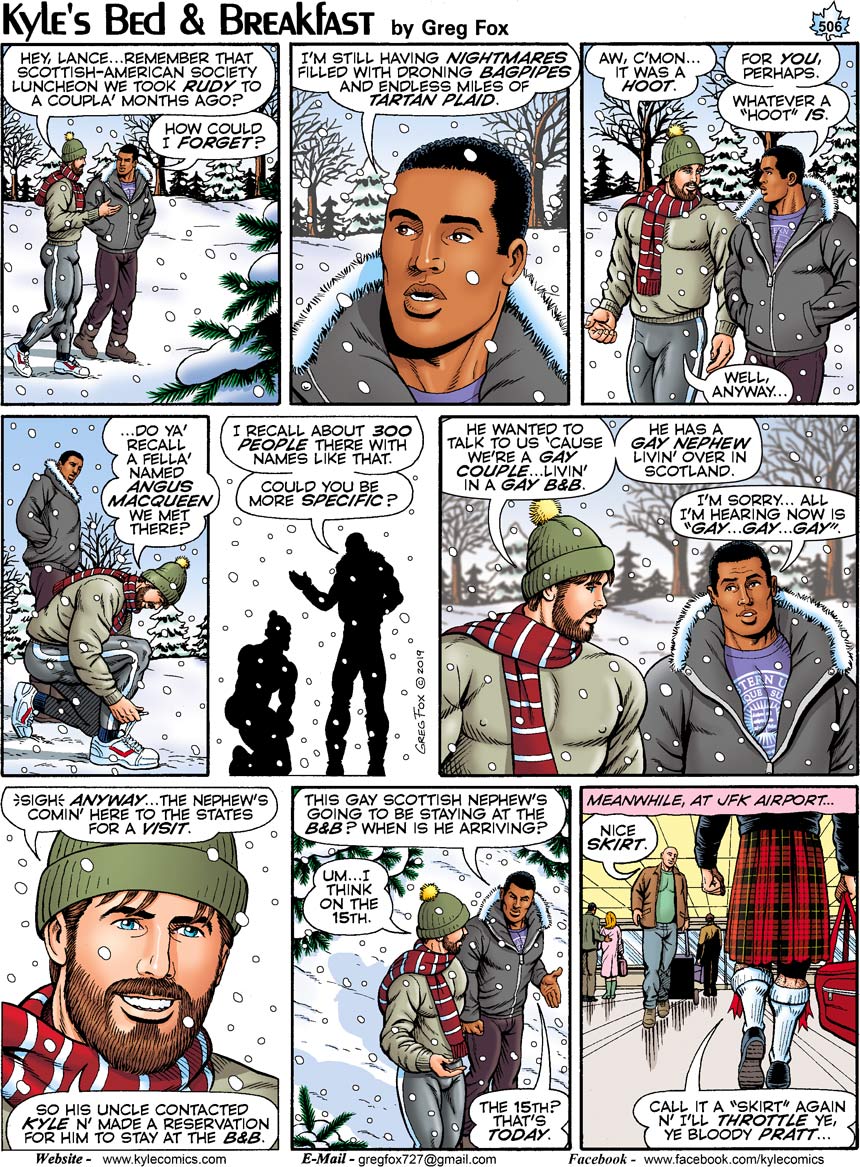 LOTS of new people jumpin' in the B&B these days; Sergei (who NEEDS to come back, like, yesterday), Jaime, and the new Irish Boy; he already seems like a spitfire....I wonder just who will be able to...um...get under that skirt?!

I'm still wondering who heard Price & Richard near the laundry room door! another poster thought it may be Breyer... I still believe that certain B&B-ers needs active storylines again; TOO many interesting characters are being forgotten, and they have interesting backgrounds, too....

ButT, I would like too see more of Drew's 'background' in those sexy jogging pants, NOW! I love those kind of spandex-y types with the single stripe down the side; I remember seeing a personal trainer wear those, in black, at my old gym in 1998....mannnn,he BURNED those in my memory!! ...allll those bumps n' CURRRVES!! I almost fainted!

GREAT, now I'm charged up before work!! I gotta go, all, I'll be back with some character plotline suggestions in another post, I'll see y'all, CHOW! ; )

Cruel, Greg. After last episode's bombshell, you jump to another storyline?! You tease...

I love Celtic men, though, so I'm VERY interested in meeting this gay nephew. I already know he has nice calves!

Why does anyone like Lance? He's arrogant, rude, and self-centered.

let's hope 'nephew' is a sexy, ginger, hairy, muscle stud who wears just a kilt or nothing around the B&B (I vote for wearing nothing)
hope his Scottish accent comes out more

DREW: Drew goes to work, and is assigned a case about a young latino 11/12-ish boy, who may be gay, and has run away from his family. Drew feels he can talk to the boy (and send him home), but then talks to Eduardo first, to have a more personal insight.

Ed's personal ostracizing from his family is still very touchy, and declines to discuss anything. Drew draws up papers to see if he kid can be placed in foster care, and discovers....the boy is Eduardo's BROTHER! Drew is beside himself, and ...FINISH IT GREG!

EDUARDO: Ed (finally) graduates from College, and decides to go into social work, like Drew. Drew sets up a meeting with a counselor who mentors interns who may be interested in social work....but...starts to get a little too 'social' with Eduardo! : O

Ed wants to blow the whistle on him to Drew, but Drew thinks highly of this individual, and won't hear of any wrongdoing(s). Ed is now worried Drew might lose his job if he 'dilly-dally's with the mentor, but....FINISH IT GREG!! ha-HAA!!

LANCE: Lance feels that he's had enough of being cutthroat in an office-environment setting, and decides to go into independent personal investment banking. A VERY wealthy man has heard of Lance's track record, and decides to bring him on board, as a personal financial advisor for his family's assets, after he passes on.

Lance quits the advertising job (along with Dave, who goes into business with Lance as an assistant), and finds out this rich, connected man is leaving NOTHING to his main beneficiary! even Lance thinks that's heartless, and wants to tell this man he can STICK it, BUT, he's now in business for himself.

RBS7079, I so love that you are this invested in the comic strip that you are dreaming up your own storylines! Some of which are quite intriguing! I have to say, one of them, (the first one, about Drew), bears some similarities to a future storyline I have for Drew, (although mine does not involve Eduardo, but DOES involve a young kid he's counselling).

The other ideas are a lot of fun, too. Here's the thing, though... I have SO many stories already backlogged because I only get 26 episodes a year. I'm already frustrated trying to figure out how I'm going to fit in all the stories I've already written that are awaiting space in the schedule to be drawn up. Hard to figure out how I'd add some MORE stories into that mix. (Not to mention the fact, that, yes... I am continually writing NEW stories for future use!).

Does this mean the comic strip needs to go WEEKLY? Well, unless I were to get a staff of assistants to help me put that out, LOL... it's doubtful that could happen. But who knows?

Anyway, as always, I appreciate your input, enthusiasm and creativity. Thank you!

First; nice to hear from you in the comment section, bubby, it's lovely when an artist replies to their fans, and show that they appreciate the love! ; )

Now, I would sincerely want to dispel any notion that I was 'guiding' your strip; I truly love your work, and I always look forward to see which of your interesting characters will show up, and get a featured strip showing and /or plotline, bi-weekly.

As you know, they are all VERY diverse, and I was just doing the 'Plot Thaughts', as a way to read how other posters / commenters feel about the strip (a 'forum starter', if you will), and THEIR views; to see who they like, want to see more of, and whomever can return(...psst; Sergei...) ; )

I'm aware that you have to proactively think out plot-lines, character angles for the panels, coloring, bubble placement, etc., and, YOU and you alone, are doing it....I can't help buy feel a little envious, that you get to do what you love for a living, be creative, and have an audience who can look, enjoy, love, donate to, and discuss YOUR creations...THAT, is a blessing, and I'm PROUD of you, chica.... : )

..now, where's Jaime?! I have a LUSTY weakness for shaggy-haired, big-bootie-d hunks, and I need a fix! Price'll do, too!! ha-HAAA!!

I'll back off, and I'm waiting with bated breath, for the next installment, Luv ya, bubby,..MUAH!!

For the life of me I cannot understand why a fun loving, big hearted, sexy MoFo like Drew would ever, in a million years, date Lance. I know Lance has had is moments but they are few and far between periods of insufferable arrogance, pomposity and disdain for anything other than his own narrow slice of the world. He's as obnoxious as Price, just not as evil.

...hey, kid, I get what you're saying, and I like to think it's one of those 'They see something I don't' relationships...

Lance has ALWAYS been the 'haughty' type, and it makes sense that he='s in a relationship with someone who can see through the snotty BS, and call him on it; Drew, in return, seems to like that challenge as a social worker, and feels it keeps him on his toes, with Lance.

They seem to have the most 'adult' relationship in the B&B; everyone else has their traits that can cause minor rifts, but, Drew / Lance can talk it out...remember when they went to P-town, and Drew was the belle of the ball?! Lance (..'haughty' as he is) was left to hold the purse! that HAD to sting, but Drew reassured him, letting Lance know, "Hey, I'm with you..." : )


...Just my opinion; we're still lusting after Drew all this time, but LANCE got him! ...s'pretty cool when someone can do that! ha-HAAA!!
; )

Personally, I want to see Lance with Kristian or Matt or Eduardo because there are not enough gay minorities that are accurately represented in the strip and this is evidenced in the polls and in gay society as a whole. Lance has no racial identity. I did not want to see him with Drew because it seems as if interracial relationships within the gay world are featured more than black gay love and I believe that this is why majority of black gay people do not necessarily associate with the gay community at large.

Now Lance and Drew have the best relationship in the strip (UGH, I can't believe I said that). It's not based on falsehoods like Price and Brad, nor inaccuracies like Kyle and Breyer for example. It's two people who compliment each others flaws who managed to find each other (UGH, I must be getting soft and I hate it).

If Mannis insists on wearing his kilt around the B&B, some of the more ardent readers (about 99%) won't be able to see one of the legends of Scotland.

Let's hope Mannis insists on ONLY wearing his kilt around the house, sometimes ;)
fingers crossed he's a nudist LOL