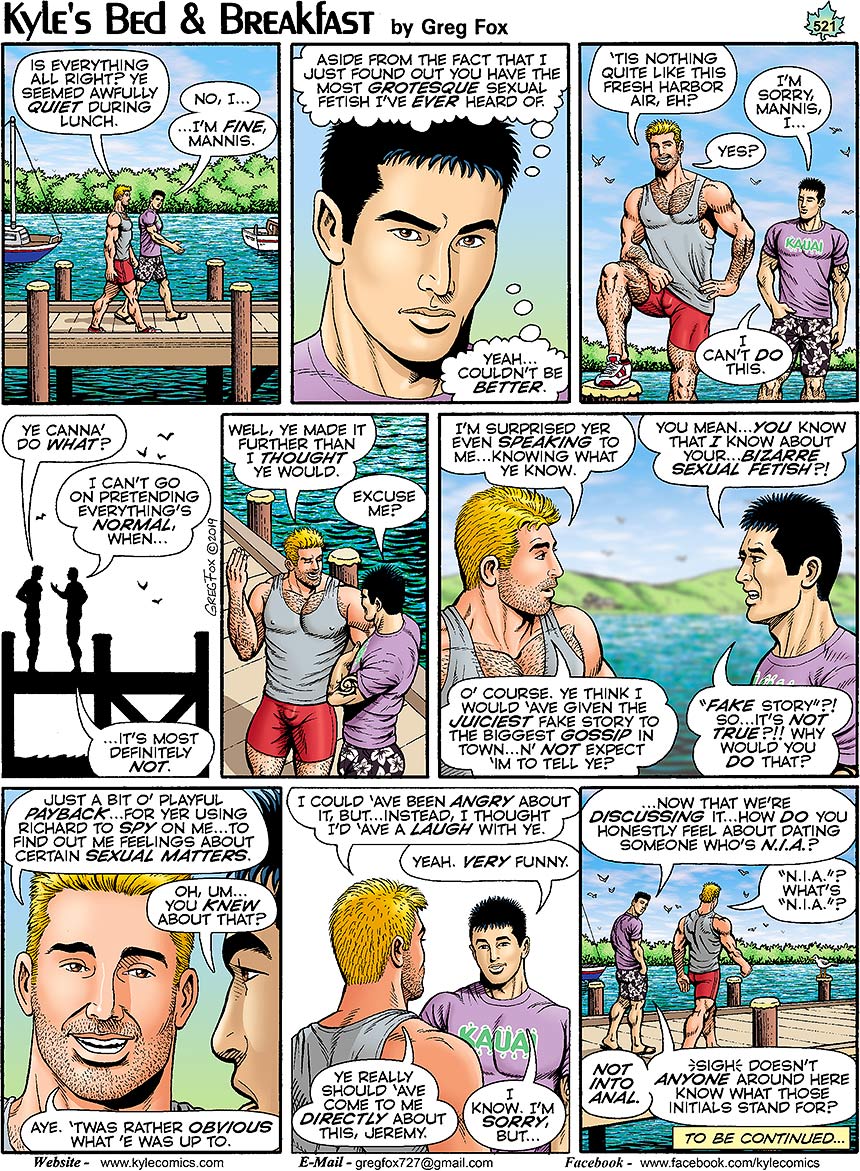 OK! I know I wasn't the only one who thought in the back of my mind, "aye, ye Scot's pullin' Rich's chain, wit' ye fetish..." , but, hoped it WOULDN'T be true, so, whatever this 'fetish' may be, it would open up a storyline topic that would extend through the panels, to be 'continued', to open up discussion, etc...

Mannis & Jeremy, IN MY OPINION, and, as I stated before, don't have enough 'backstory' to be interesting as characters; Jeremy just answered the B&B front door, and said, "Ohhhmyyyy", & Mannis comes off like Popeye doing a Off-Broadway play of "The Lost Boys"...SO, I was hoping this 'fetish' would bring a lil' 'tingle' to their union / storyline, but I see it wasn't to be....honestly I'm a mite disappointed... : (

....especially when there's OTHER characters that have some SPICE!
- where's Eduardo?!?
-is Brad still angry at Price, for sending Jaime off to Louisiana!? - is Jaime still in 'love' with Brad?
- is Rudy lonely!?
- WHEN are Dave & Nick getting MARRIED!?
- will Drew & Lance get Married?
- will Richard get 'that call' about Kristian?
- will Kyle EVER find the eternally missing Breyer!?
- WHY WON'T SERGEI & JAKE COME BACK TO THE B&B!??

Entire storyline and "romance" between these two stinks.. absolutely terrible...

That was sweet. I'm glad that Mannis isn't upset, since bringing Richard into the situation was childish. Jeremy needs to be adult enough to let his potential partners know how he feels.

That was fun but (you should excuse the term) anticlimactic.

Not surprising in hindsight, but...I wouldn't mind finding out if anyone at the B&B has an actual fetish. Does Brad sniff his teammates socks after a game? Does Lance like Drew to tickle him? Does Kyle jack off reading tofu recipes?

You really don't treat your readers with respect. It's not that you didn't tell us. It's that you continue to write and tell super cliche stories. We all saw this coming.