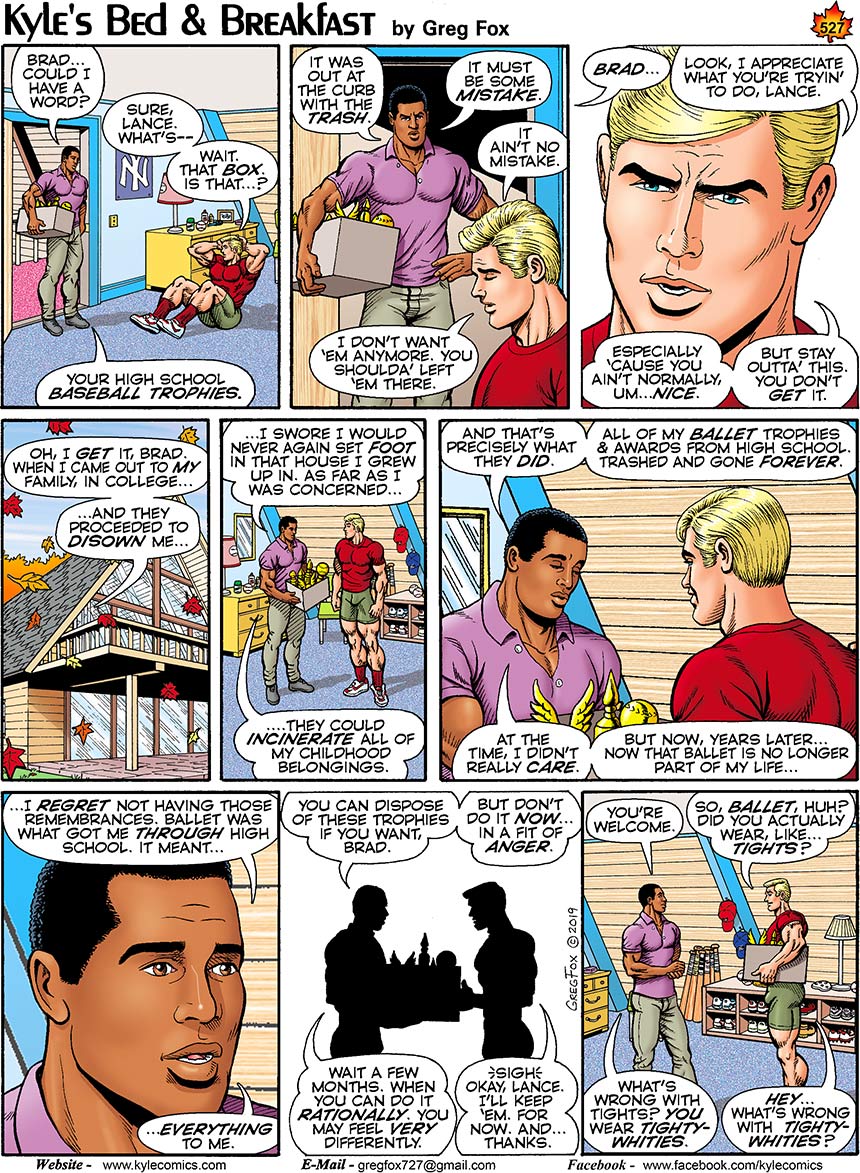 It's nice to see Lance's rational side; We see him as pompously arrogant most of the time (especially when Price comes into the fray), but when he gives a glimpse of his Gay past, I understand WHY he's been accepted by the B&B patrons (and, Drew's Heart...)

It's easy for the 'Brad''s of this world, if they are blond, built, 'all-american', and masculine; YES they may have their hurdles, but the FAST acceptance if you're 'Hot' knows NO bounds....😒

BUT, for my beautiful, educated, proven, and FINE brothas, there is always an invisible 'acceptance' door that they (we) have to go through ALL the time that makes one reflect, and say, 'will it ever end'!?

Lance's ballet accolades were EVERYTHING to him; it was the formation of the REAL Lance, and if he was accepted by his Family for his being Gay, he could've had FAR greater successes in his life....YES, he's blossomed, through drive & determination, but the pain of unacceptance by his OWN Family...THAT never goes...😔

BUTT, I would KILL to see Lance in tights; this FINE Ebony Man was at my Gym last week, and asked me to hold a machine I was using for him...I always see him, but pay him no mind (too young for an Ol' crow like me), BUTT, he was wearing black compression tights, and when he turned away......BAM! BOOM!🍆🍑...SHWING, went ME!😜

..so, seeing a Lance bippin' and BOPPIN' around in a 'flashback' would be VERY good for the heart, Greg! ...or, just put me OUT! 🥴

...who you tellin!?😉ha-HAA!! It's like chocolate or vanilla; different 'textures', but it's STILL sweet, and, goes down weeeellll...😋

Honestly, I feel as if Brad's character has no substance at all. He's a yuppie, blond haired, blue eyed guy and it's hard for me sympathize with his plight. In every episode, he comes off as more and more moronic.

However, Lance showing a different side is MUCH better than Brad's feigned attempts at angst. Really. Lance has ALWAYS been much more interesting and I am curios as to why he is never scantily dressed like Drew, Brad, and Price. Is Greg trying to tell us something that Josman did with regards to black men seen as sex symbols?

Personally,I would like to see Lance with Kristian or Matt because we have not seen a black couple. However, Lance and Drew have a good relationship but why is it that we never see them holding hands or even kissing like we do with the white couples?

Lance can be so sweet. That's why he is my favorite.

I like it when we get the odd view of Lance's softer side. It's hard to remember sometimes that he actually likes his housemates.