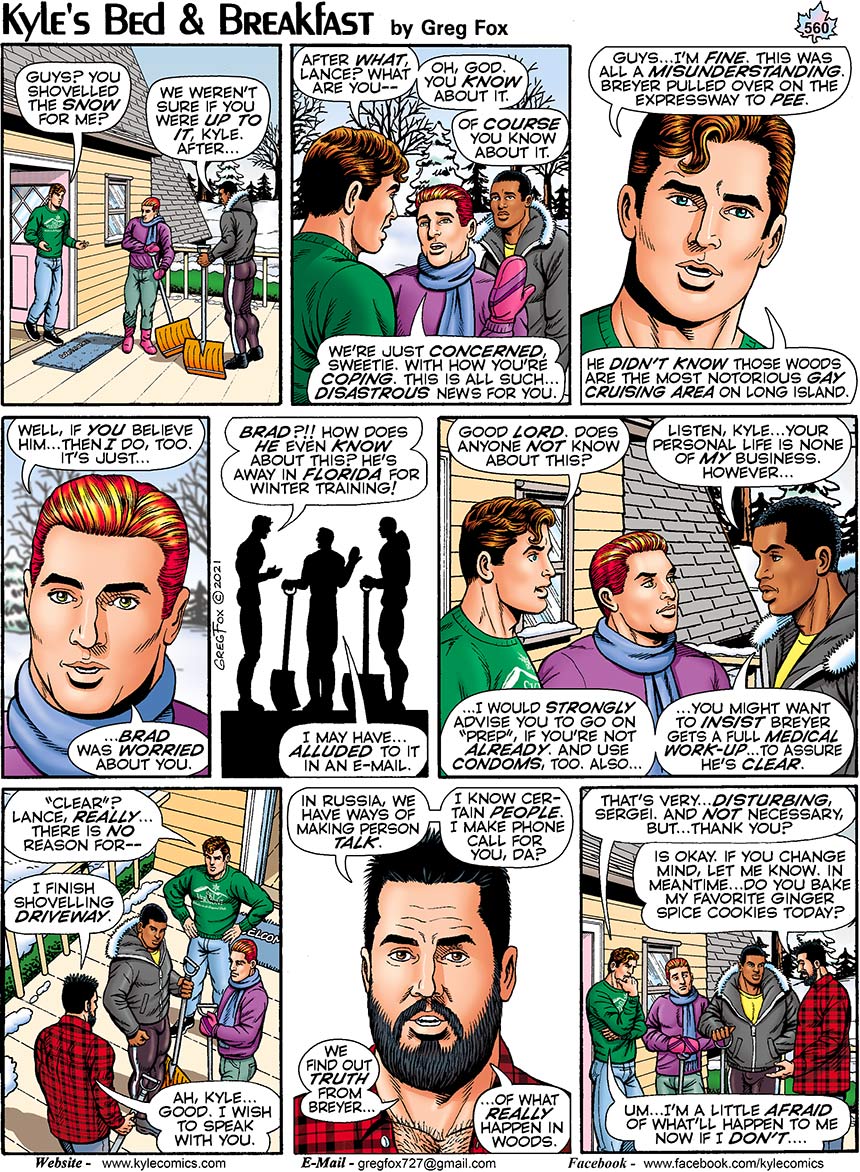 Of course the house queen knows Kyle. And we also know that Breyer didnt just stop to pee. When Breyer ran into Eduardo coming out of the woods he was obviously nervous and uncomfortable . Not the behavior of a guy who was just takin a leak.

I can see this story is going to play out with a lot of lies and then Kyle gets an STD from you know who.

This is is an interesting observation on Lance. I didn't expect him to have that normal slicked back hairstyle. And this probably just a pure coincidence but with that hairstyle, in the sixth frame of this particular episode, the hair made Lance's facial structure nearly identical to Rob Ford, one of our Politicians up here Toronto.

..NOW, on to Kyle; This story-line IS interesting, and I'm pleased that it coming back to topics Gay Men can relate to, including choices of sexual responsibility; Lance & Rich HAVE been 'burned' by Love, and them, insisting Kyle takes personal actions with his sexual practices, shows not only they CARE for him....but CLEARLY, DON'T believe Breyer....

....I've said it before; I'm hoping this story-line will have some 'turbulence' to it, because the characters can interact with each other, have differences of opinion, & relate to the 'drama' that WOULD reside, in a B&B, FULLA' Gay Men!! ...ha-HAAA!!

**PLUS NOTE**: ...Normally, I don't like to 'point' out stereotypes of certain characters' ethnicities, because to ME, they are the PERSON in the B&B, WITH the ethnicity; but, I'm not really crazy about Sergei suggesting he has "Russian connections" having 'ways of making person 'talk''; I know he's concerned for Kyle, but, we don't need a 'dark' layer added to him, for a punchline grab...s'MY personal opinion....don't hit me....

...that's RICHARD, Love, not Lance..Lance is in the Parka....SPEAKING of Lance, I'm loving those SUPA-HOT ski-tights on Lancie-Boy; It's nice that Rich & Lance are FINALLY getting some 'updating' with some REAL hot looks!!

Oh my, oh my, it's always good to have friends, even if they seem to be conspiring to drive you crazy.

I agree -- this story really taps into the gay drama that I think we're all familiar with. Great storytelling.

I love that literally no one believes Breyer, including Kyle (even though he's pretending he does). Breyer is either going to lose a lot of friends very quickly, or he's going to prove everyone wrong in a spectacular way.

I also love that Sergei is pretending to know Russian mafia. He clearly thinks quite highly of himself (and the "people" he knows), which is endearing if sometimes a little over the top.

Speaking of Sergei and secrets, are we every going to find out what happened between him and Jake? That hasn't been resolved yet, has it? Or what's going on with Lance and Drew? So many relationships to explore!

So far, I'd say Sergei's behavior is a lot worse than Breyer's.

We don't know what Breyer was doing in the woods, but we just heard Sergei
willing to arrange for Breyer to be...what, tortured?

And now the whole house is in on the plan to rupture the relationship of Kyle and Breyer. As far as I go, they're a lot of worse than Price. They're self-righteous, scheming sneaks.

It's worth noting how real these characters seem, too. Perhaps we've known people like them in our own lives.

The fact that everyone knows is an indication that Richard runs his mouth way too much. I mean COME ON! He needs Kristian back in the worst way. That being said: I don't think that Kyle believes Breyer at all. I must say: Lance looks phenomenal in tights! Geez!!!!! However, I do think that Breyer is lying through his teeth! Even if Breyer is planning a major surprise, it sets up a lack of trust. I think that in this storyline, Greg is doing great (UGH, I hate when I have to admit that I'm wrong!) because it (1) addresses parameters in a relationship and (2) STD potential (3) duplicity in a relationship.

I love Sergei, but I agree that his "I know people" remarks were groan-inducing. I get that it was supposed to be funny, but it just fell flat (and was a little gross).

I do love the recurrence of the house pitching in whenever someone is too "emotionally distraught" to do chores theme. Man, if I lived in that place, I'd never lift a finger.

I hear you. I think that people that "know" people shouldn't be trusted because it's a matter of staying on their "good side."

Kyle needs a hug. It is clear that he doesn't believe what Breyer said.

Thanks for the correction. It just struck me to see Richard with a "normal" hair-do but I guess only him out of the B&B gang could rock that slicked-back multi-colored facade. I guess all them are able to hit us with something new when we don't expect them to.

...s'all good, Bubby,I'm hoping this story-line will bring in some new readers, who can catch up with the goings-on at the B&B, since a 1/3rd of the character are gettin' updated 'looks'; Brey's mustache, Ed's overhaul, Richard looking debonair (but with flair), Lance showing showing some BOD-DEEE,(and, some Hot BOOTY..)...

Greg seems to have heard some of my 'rants', about stirrin' up some controversy at the B&B; I reeeeally hope we'll get hit with Breyer actually 'cheating'...I feel ALL sides of a (Gay) relationship should be explored at the B&B, including 'turbulent' situations...A LOT of the commenters here, DON'T believe Breyer, because, let's FACE it.....

...which would bring differing opinions, and responses, on how to deal with them; I don't think the Gang is self serving, or being 'nosy' for drama's sake..they are FAMILY, and Kyle, The HEAD, rarely deals with this type of situation, and, how to navigate it....

I not like Sergei talk of making people tell truth. It looks ominous. I believe Breyer. I think in hisvplace, I'd look embarrassed and guilty even if I were innocent, many people would do.

..I'm loving the "update" of the Boys, on the header, Sir Greg....loving Kyle's coquettish glance - ..looks like he's ready to kick Breyer to the curb, and staaaart LOOKIN'!! ..ha-HAA!! >comeHITHER<

The act of violence is disturbing. Violence should never be permitted.