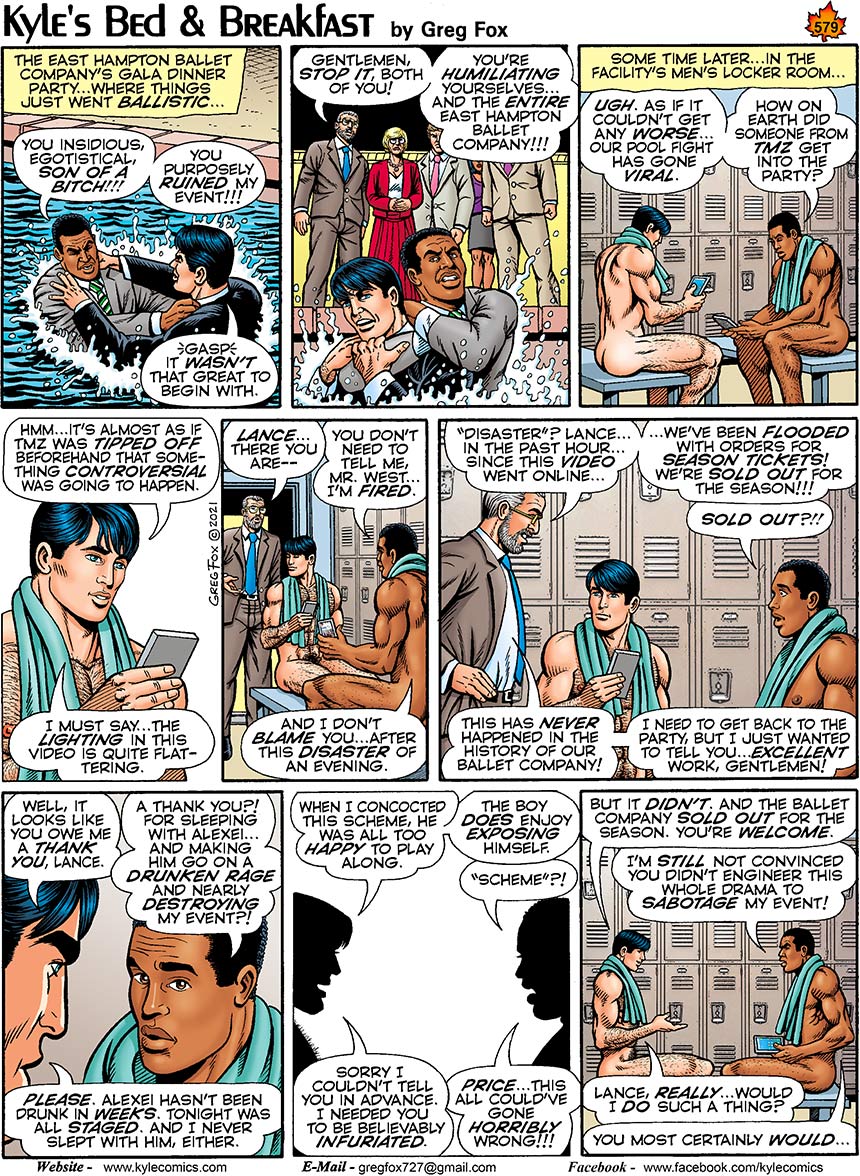 OMG - did I call it or what? Unless Greg drew this strip overnight it's exciting (or scary) we think alike. However, I did not see Price having staged the "scandal" in cooperation with Alexei coming. The multiple panels of Lance and Price bonding nude in the locker room (including Price's natural thatch - carpet does match the drapes) was worth the nearly year long torture of Breyer and Kyle. Perhaps this will be a new chapter of the pair as friends, perhaps Lance will trade Alabama for Kentucky (which does border his home state!). Well done Greg! Just three strips left for 2021 - can't wait to see how this year ends and what's coming....

P.S. I seem to remember reading Lance is also a dancer; a pas de deux of Lance and Price would be a tremendous way to end the season, and would certainly merit a standing ovation at East Hampton Ballet Company.

You called it, Frank!

Now, whose bed will Alexei end up in at the B&B? Price deserves a congratulatory romp in the hay with him...or would it be a pas de deux?

I hadn't read your second post before posting, Frank. I'm glad we are of one mind when it comes to euphemisms...although I paired Price with Alexei! as his principal dancer

'..Of course, it will go viral on social media, the ballet company will be more popular than ever....'

...AH, well, storylines in Comic strips don't HAVE to make 'logical' sense, butt, with both sittin' down on those juicy buns, and me NOT gettin' a peek, is unacceptable! ...ha-HAAA!!!

guess this small company doesn't depend on nutcracker in december with millions of kids for the income.

Two laugh-out-loud moments for me:

-- Price has time to insult Lance's event even as he's trying not to get strangled and/or drown.

-- Price accusing Alexei of being an exhibitionist immediately after having a conversation with his fellow board member while completely nude.

This has gotta be the BEST surprise plot twist in the entire history of this strip!
Better yet is the locker room tableau of a naked Price, replete with damp curtains & carpet!
An even more surprising (but logical!) alliance might reveal itself in the next instalment,
where we find tha Price had also enlisted Richard's help in engineering this? (especially the "going viral on TMZ" bit!)
Although no other B&B room mates were in attendance at the event, the fact that it was recorded on video
will no doubt result in some terrific recaps along with the requisite catty commentary in strips yet to come.

As for RBS7079's note above, the only implausible factor in this great scenario is that
Price & Lance's cell phones are STILL functioning at all after their dunking in the Koi pond! lol

One small step for ballet.

...YES, this Ep comes off a bit 'catty', inasmuch as how Price & Lance lost decorum, and became "Mean Girls" scrathin' at each other, but I, a SIXTY year Old, was around when "Dynasty", "Falcon Crest" "Knots Landing" et al, were popular amongst Gay Men who could find escapist 'shade', while navigating the realities of their Gay 'lifestyles', no matter HOW they wanted to 'live'.....

..as we know, stereotypes ring TRUE, and although no one really wants to be labeled anymore ('non-binary', etc.), nothing changes the fact that the sterotypes are THERE....look at Lance & Price; Sexy, uptight, heads for (conniving)business practices....and, they call each other, 'boor', 'neanderthal', 'imbecile'...

...a majority of these characters ARE 'stereotypes', and it's interesting to see them navigate thier interaction with one another; Lance & Price are GOING to be the 'cattiest' because they're so much ALIKE, yet different in their approach....

Nice twist, but couldn't this come back to bite Price in his ass?. I mean, it is his mum's ballet company after all, and the viral video contains a clear proof of his homosexuality.
I don't understand why some of you guys find it strange that they are both naked in the locker room. Isn't it legal in the USA? I know it is not legal in France, but I thought you Americans were more liberal than that.
Great strip! I am totally hooked on your stories, Greg. Thanks for sharing them with us.

...bon soir, Alex!! ...ha-HAA!! ...I think Price can scoot out of THAT, indicating he didn't 'know' of Alexei's sexual proclivities...'Lexi didn't SAY he slept with Price (only Lance knew) , so Price plotted, VERY sneakily...and I think Greg just wanted some 'flesh for fantasy', by way of the nude Locker room scene...NO complaints, HERE! ...ha-HAAA!

I am legitimately astounded to discover it's illegal to be naked in a locker room in France. What do French people use locker rooms FOR?

It is not just that is forbidde, but also the fact that this ban is quite a recent. It used to be legal until the early 2000's. Such a "progressive" country!

Hon, if I fight someone and go in the locker room being nude with each other - I even can't talk to that person. Let's be serious.

"But it didn't"? Wrong retort: "it COULDN'T HAVE gone horribly wrong"... if it just "didn't", Lance should not be thanked for a mere fluke.

I think that at this point, Brad isn't interested in Price and besides I think that Darren is a more natural couple.