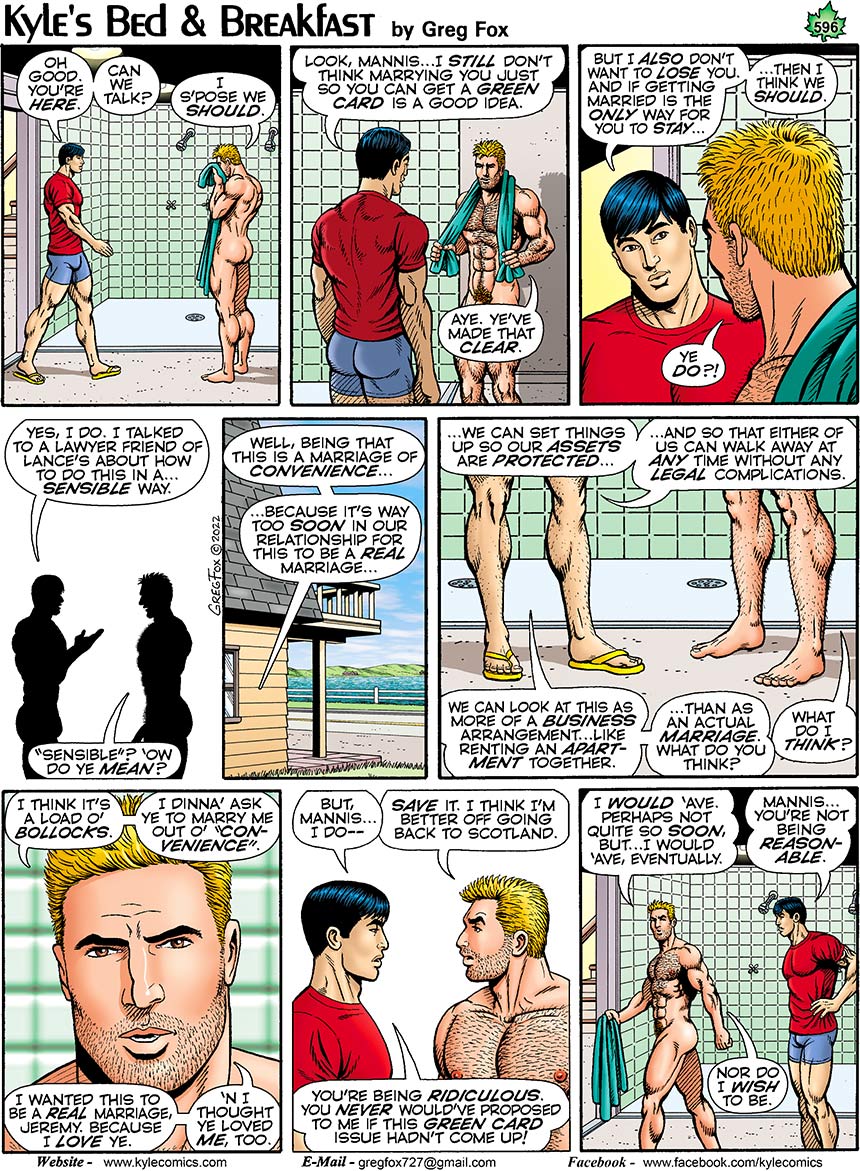 I'd marry Mannis in a heartbeat. Jeremy is being obtuse and quite unromantic for someone in love, if he is. Couples who love each other have married sooner than planned for a lot of reasons - pregnancy, imminent death, healthcare benefits (in the US, for example), housing and yes, so tbey can remain together in immigration situations. Jeremy sounded more pregmatic and less affectionate, and the prenup discussion didn't help (what assets - they are living in a gay bosrding house - Price aside?). Marry for love, sort the rest.

I dont agree with you Frank. you dont get married out of necessity. i wouldnt have married him either. jeremy is not ready for that kind of committment, he is too young and immature . he needs to play the field . and Mannis needs to go back to scotland and disappear.he never was interesting at all.he was a boring flake .

...Jeremy darling, I don't think approaching Mannis NUDE, in the shower, with this sort of important topic was the right thing to do....BUTT, I ain't COMPLAININ'!! ...ha-HAAA!! ....grooowl, lookit those Irish BUNS.....

....but, to the situation at hand; Jeremy IS being (financially) level-headed about this, but, it SHOWS Mannis that he is not 'invested' in the relationship...It shows DOUBT, which irked him....

...Mannis DOES want to stay in the Country, but, he's doing it with REASON; he loves Jeremy, now knows he related to Rudy, & digs the B&B'ers...he NOW has reasons...mostly, being with Jeremy, in a Married UNION....

Well I didn't see that coming (Mannis walking away). I hope they work this out because I think they make a good couple.

Hi, all. I agree with Frank, Jeremy was way out of line. Somehow I see Rudy being a key player around solving this issue

This is the most important ingrediaent to a good story--conflict. our Greg knows what he's doing and also it might help us if we have a similar situation.

Incidentally Chow-Chow, his ass is Scottish, not Irish.

...Oh, I know, Nickie, I was writing fast, Blogger doesn't allow us to edit comment, and, I follow an Irish Bodybuilder on IG that I looked at, the moment I came to the post...'CAUSE, all I saw, was TITS n' ASS....

Well, on the one hand I think Mannis is quite right to be offended and he'd definitely be a great husband. But it is also true that marriage itself is a legalistic, heteronormative idea that many gay and lesbian activists have resisted and many still do. They didn't want to play by straight people's rules or replicate their ways of organizing relationships. The history of marriage as a practice is not romantic (particularly in North America and Europe). And at the same time many queer couples fall in love, commit to being with each other for life, and some decide that they want the legal advantages that come with being married. For example, if one partner is sick in the hospital, his husband can go see him because he is considered family legally but that doesn't necessarily mean there won't be arguments with hospital staff. Property, money, custody of pets, and other important issues are also covered within that aspect. As for Jeremy himself, well, I've never found him to be particularly compelling and I usually like the more introverted characters. He comes across as a bit prissy and bland. But maybe some interesting character development is going to happen and I'll end up loving him.

there a linguistic confusion in the sixth panel.

"We can look at this as more of a business arrangement . . . like renting an apartment together. Then as an actual marriage."

It's a bit confusing.

It'll be interesting to see Mannis' character open up and become more complex, particularly since he's a 3 year-running B&B person of the year. He may not be especially "interesting", though that's fine. Richard, by any measure, is far more interesting; and though he's written as a friend with a heart of gold, he's also an instigator who stirs up as much trouble as he solves. He fiercely supported Kyle when Breyer cheated, if we can call it that. His character also kissed Breyer and tried to get him in bed behind Kyle's back, leading to an eviction from the B&B several years ago. His comment, perhaps meant in jest, to Darren re: the date with Eduardo was shady - their relationship is already somewhat fragile, and I suspect Darren will end up matched with "bottle guy".
Mannis can stay boring - at least he's written as direct, honest and trustworthy. And hairy.....

Raven, you caught it! Auugggh, I hate when I make mistakes like that! To your question, I definitely meant to use "than" instead of "then" in that sentence in panel 6.

And just to be crystal clear, I DO know the difference between the two words. When I originally wrote the script for this in a notebook, by hand, (yes, I still do that!), I used the proper "than". But when transcribing it to the actual artwork weeks later, I wasn't paying attention and incorrectly wrote "then". Mortifying!

Thank you for pointing it out. I hope it makes sense now!

Thank you, everyone, for all of the thoughtful comments! 🥰

Oh, and PS, yes, I fixed the word balloon to show the proper "than", (in case you were looking and wondering what this was all about!). 🥰

Mannis IS being perfectly and truly reasonable: the only one in that odd couple.

So Mannis is getting what he wanted with a caveat that makes Jeremy (the man he loves) comfortable, and instead of being excited he starts a fight and walks away. Super mature. If I were Jeremy, I'd feel even more reluctant to marry him at this point.

Love the strategically placed word bubbles, by the way. Too funny.

Jeremy wants to give up that piece of arse???

first off, fuck that speech bubble in the second panel but...
Mannis, you come back to Scotland and get naked for us in the UK and no one will bat an eye when you wear a kilt is Scotland.

I just wanted to point out that the Kyle's B&B Patreon page features the full-frontal, "uncut", (in more ways than one!), version of this episode. You do need to be a member to view it, but that starts for as little as $3 a month, and you get a lot of other cool benefits, too. Not to mention, you help keep the lights on at Kyle's B&B!!! Visit the Patreon page at https://www.patreon.com/gregfox

I keep saying Gregg should do the episode when Kyle's B&B do a nudest week BUT it needs to be the episode without anything covering the guys. sadly I think that would only happen on Patreon and sadly I can't afford to join ;(

I'm on Team Jeremy for this one. Jeremy is truly protecting his rights and has the right to do so. Even though Mannis is attractive and in love, he is letting his emotions overpower reality and if he really loves Jeremy, he will accept Jeremy's terms.