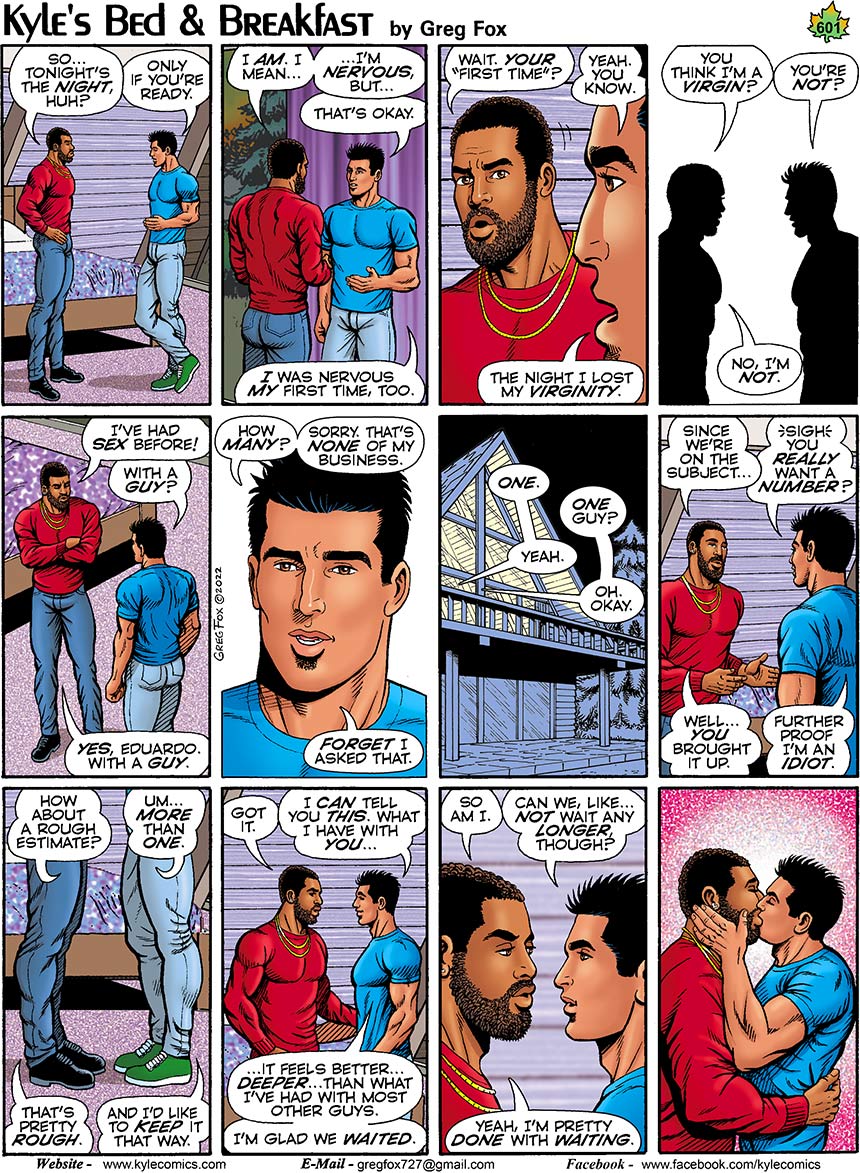 ....AH, the joys of new Sexual Love; Greg was VERY generous with 12 panels, but...honestly, I'm a bit disappointed in Ed, discussing a 'previous Love' history, and, thinking Darren was a Virgin (to Men)....

...TRUE, Darr never really lets on about his sexuality (I've never even seen him check out an ASS), but, if...IF...a Person connects with another who's more sexually experienced, it's YOUR duty to teach, and let that Person benefit from your expertise, which make BOTH of your lovin' HOTTER....

...P.S., I used some O' those techniques on a Personal Trainer at me Old Gym a few Years ago, with the same jiggly rump, as 'Steve'...ahhh, ain't nuthin' like a bit of "Adult Education", ha-HAAA!!

This episode was a long time coming, finally the waiting is over and Darren & Eduardo are going to do the do. The last panel is proof they belong together and scream out loud the chemistry between the two of them. I've said from the 1st time they met they had strong chemistry, the way Greg developed their romance, they have the makings of being the B&B's best couple, it won't be a perfect relationship, it will be a honest one. Can't wait for episode #602.

Thanks Greg for giving us some much needed romance!

I have to disagree with you on how Ed handle things, it goes to their character that Ed would think Darren was a virgin, Darren never spoke of his sexuality, rightly so because it was really none of anyone's business. Of the two Eduardo is the more experienced but Darren can hold his own you'll see.

actual humor. I really enjoyed it.

Whoa, Nellie! That kiss was spectacular!

Honestly? I'm just glad that Greg has gotten off of that whole Price/Brad kick. To me, they would be the most BORING couple outside of Mannis' dalliance. That being said: it remains to be seen if Eduardo's affinity for ALL black men and a few others would come back to haunt him in this situation. In other words: Can you truly turn a ho into a housewife...? We shall see

Damn, what a saint. Guess I'm a ho

You always remember your first.
After that, they all tend to blur together when you get into triple digits.

"..After that, they all tend to blur together, when you get into triple digits..."

Eduardo is no more a hoe than any other man at the B&B, I'm not even sure where you got the idea he was one in the first place. If any character fits the description of a hoe it would be Lance before he met Drew. Eduardo was young when he came to th B&B and with each guy he got involved with he had genuine feelings for them. Darren is the first guy since Jake who was genuinely interested in him, the best thing about them getting together is the fact they took time to build a relationship from being friends to growing into lovers. Cut him some slack.

I see your point. However, I do think that Ed did not have genuine feelings for that disastrous dalliance with Brad. I do think that Ed's past could haunt their present relationship. That being said: they look great together.

I don't see Eduardo's past being an issue at all, if anything Darren will look at Eduardo as a survivor, being kick out the house at 18 for being gay, getting his GED and putting himself through college, all Darren cares about is Eduardo's character, besides Eduardo can help him make up for any lack of sexual experience, which I don't think sex will ever be a problem for the two of them at all.

I hope not but at the very least, they should address it just in case. I DO like the fact that he (Ed) went back to school and got himself together more. I do think that Darren cares about Ed but Ed is young and I'm not sure that he has his hoish tendencies put to rest. He can do it of course. I am actually rooting for these two because I think that they're relationship could be stronger than even Lance/Drew (isn't it about time they moved out and met each others families and gotten married?" Also, no one wants to "make up for lack of sexual experiences" with tricks that they've learned from other people.

What is it that you have against Eduardo you keep referring to him as a hoe, what exactly has he done that makes him a hoe? So what if he's the youngest in the house, if you want to call anyone a hoe it should be Lance, he did sleep with Eduardo knowing damn well he was 18 and that Eduardo could catch feelings for him, hell he even slept with one of his clients. No gay man came knowing every trick in the book, we've all learned a few from guys we've slept with.

Let's be real: Ed has CERTAINLY gotten around. Yes, he's had a rough life but that doesn't mean that he hasn't been tagged quite a bit. I DID call Lance a hoe. But unlike Ed, Lance was completely open about it. He didn't hide it at all. He changed when he got with Drew. Eduardo knew what he was doing at 18 and I'm pretty sure that his body count was well in effect because Lance got to him. Now, I "don't have anything against Eduardo" as you say, but let's be real: he's far far far from virginal. You made an astute point though: we have all learned from the guys that we have slept with and in this case, Ed should be a professor.