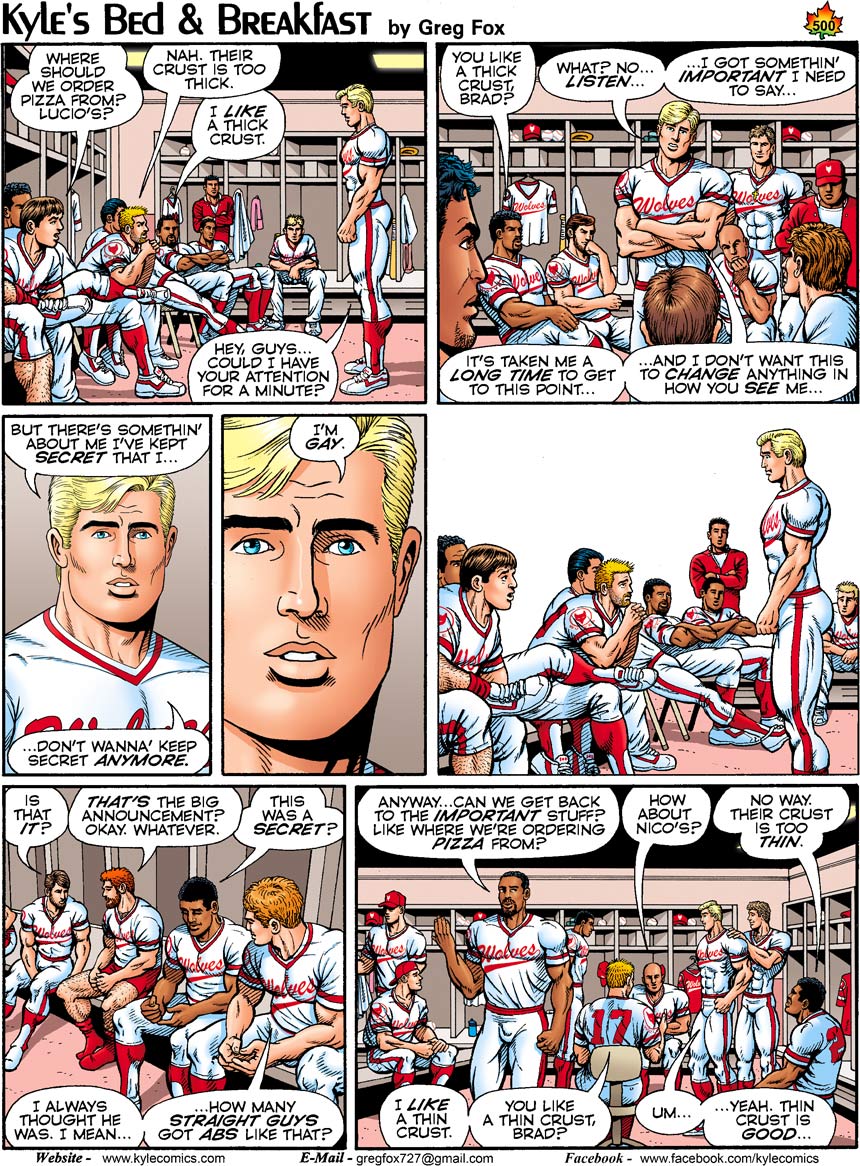 a beautiful 500th episode.
thank you.

Very nice, and very fitting for the 500th episode. If it's a little pat that NOBODY on the team raised an eyebrow, let alone had a problem with it (this IS the team that ostracized Jeff Olsen a few years back), it was still a nice depiction of how times have changed. I do hope we'll get a diverse reaction from one or two players at SOME point, strictly in the interests of realism (while there may be one or two out players in the minor leagues, there's a reason there are still no out major leaguers - in any of the four major sports - and that reason is homophobia, which is still rampant in sports culture), but I don't find it hard to believe that the majority of Brad's teammates are unfazed at the news.

I also appreciated how you had Jamie stay silent, with just a supportive hand on Brad's shoulder. It was Brad's moment, and having a straight(?) ally being quietly supportive was the best way to portray the scene.

Happy Anniversary, Greg, and thanks, as always, for sharing your work with us!

Bravo, Greg. Well Done. That was perfect. Thank you. And I love a thick crust.

Fantasy baseball is not only a competitive online game ,its now in comic strips. Where players come out and nobody bats an eye. You wouldnt see guys even in high school or college do this. Times change but the top mens sports homophobia and bigotry does not.Mens Football, Baseball,Basketball are not sports that youre going to see a Brad type come out without major fallout.

Yeah.. About time Brad came out! Happy 500th! And i like both types of crust. Pizza is pizza!

I had my doubts if that would happen at Brazil, my country.

Jair Bolsonaro, a former army captain, can be the next president and he's violent and homophobic, he said that if he had a gay son, he would prefer that he was death, because to him he was death. And that if he see two "men with moustache" holding hands in the street, he beats them.

This a very sad moment to the brazilians.

...hey all, just got out of jury duty (no cases today, and I waited & waited, for the iconic posting, and, not only I am proud for Brad, I am proud for Gregory Fox, who gave us this strip in 1998, and now a lot has changed for everyone involved.....

Brad's 'that's it?' response after 20 years (I know, it's not in "Kyle" land, but it WAS a long wait)shows that change HAS happened, in relation to Sports and Homosexuality to an extent; Jaime's religious beliefs weren't challenged, why should Brad's sexuality be anything these days?!

..another poster brought up Jeff Olsen; look what HE went through at a certain time...Brad now knows he is LOVED; by teammates, by Jaime (..I caught the silent shoulder of support, too, Mark)and Kyle & the B&B...he'll do GOOD. let's hope Price'll offer a congratulatory BJ..Brad REALLY likes those from him! ha-HAAA!!! : )


...and as for YOU, Mister Fox; I think I can speak for Most, if not all (..or, all whose all 'there')that, your Comic strip has changed many lives, brought many around the world together,Gay & Straight,
and added a VOICE to the evergrowing acceptance of the new Gay Generation. Your 20 YEAR comic strip showed many stripes of GLBTQ through the years, and respected them, honored them,showed their problems, & shined a light on EVERYONE wanting RESPECT for who they ARE.

I am honored to read a strip as an openly Gay Man, who knows that he is FREE to do so, in this life and time.

...may you celebrate your milestone by knowing you are LOVED, and we all THANK YOU, for leaving this strip, and your ART, as a reminder of your legacy; you will NEVER....NE-VER, will be forgotten because of it.

Keep doing your best, bubbie; now, go eat some of Kyle's pancakes, and some Matzo balls,you're getting too THIN! ha-HAA!

Who's the hot bearded blond with the brush cut?????

Ha! I love the non-reaction. Or at least the non-reaction *so far*. A team member or two might be waiting in the wings to pass judgment they didn't feel comfortable passing in front of the others. We'll see.

Also, happy anniversary! What a perfect way to commemorate strip #500.

We so need more coming out comics like this.

I remember coming out to my mother:

"Yeah, I've known about it for quite some time. Wash your hands, we're having dinner in ten minutes."

Oddly we were having pizza that night.
With thick crust.

My father of course found out thirty years later.
I had to calm him down and tell him it wasn't his fault.

pfft, yeah, that was pretty much the reaction I expected!

....yes, all, I'm back, but, just to give Greg another 'Thank You' shout=out for the anniversary of 'Kyle's B&B"; the official first date of publication was Oct. 26th, so I wanted to extend another message of appreciation.

I stated it earlier, Greg, but I truly am glad for your input to the Gay community with this strip; there still are many Boys & Girls who feel they have no "Out", so to speak, and feel that their feelings and desires should be shamed, and not verbalized, therefore leading lives that are not 'true' to themselves.

Your strip shows a more natural, domesticated lifestyle for them (Richard serves what is deemed a more 'debauched' lifestyle, but even he knows that's not what he wants; Kristian showed him that), and "Kyles" can help them in some way to accept themselves and maybe follow 'Kyles' path, to a new type of 'family' for them.

so, as stated, you've done your work, and I and clearly others appreciate you for it. may 'Steve Angel' always be by your side, and THANK YOU.

RBS7079, thank you for such kind words, and for all of your kind and insightful, (and often laugh-out-loud funny!), comments through the years! I'm really touched. Thank you to everyone else here, too, who wrote to wish me a Happy Anniversary with the comic strip. I feel incredibly blessed to be able to bring you these stories week after week, and believe me when I say there's a lot more of the B&B guys stories to tell. I only get to do 26 episodes a year, however, I write scripts for far more than that in a year, so you can imagine the amount of stories that I have built up in notebooks, yet to be drawn. So... stay tuned! And once again... thank you, for being here and for your warm wishes. It means so very much to me! ☮ & 💛

Reminds me when I was outed to family. Christmas dinner, my brother asks, not bring a girlfriend, I said "don't have one". My little sister with a gleam in her eye says "What about your boyfriend". I said "he is with his family today". Everything stops for a count of 3, forks halfway to mouth. Then conversation continues onm "oh where does he live?...

After all these years, is anyone on the team surprised? Congratulations Greg on this spectacular achievement! And cheers to you on the beautiful work for this episode - you've come so far and developed as an artist throughout this journey. Look at these gorgeous shots of the team in panels 5 & 6. It's like an Eakins painting! You've captured that subtle, seductive masculinity in these characters and given them life! Bravo! Thank you for continuing to produce this wonderful series, best wishes for another 500! XOXO