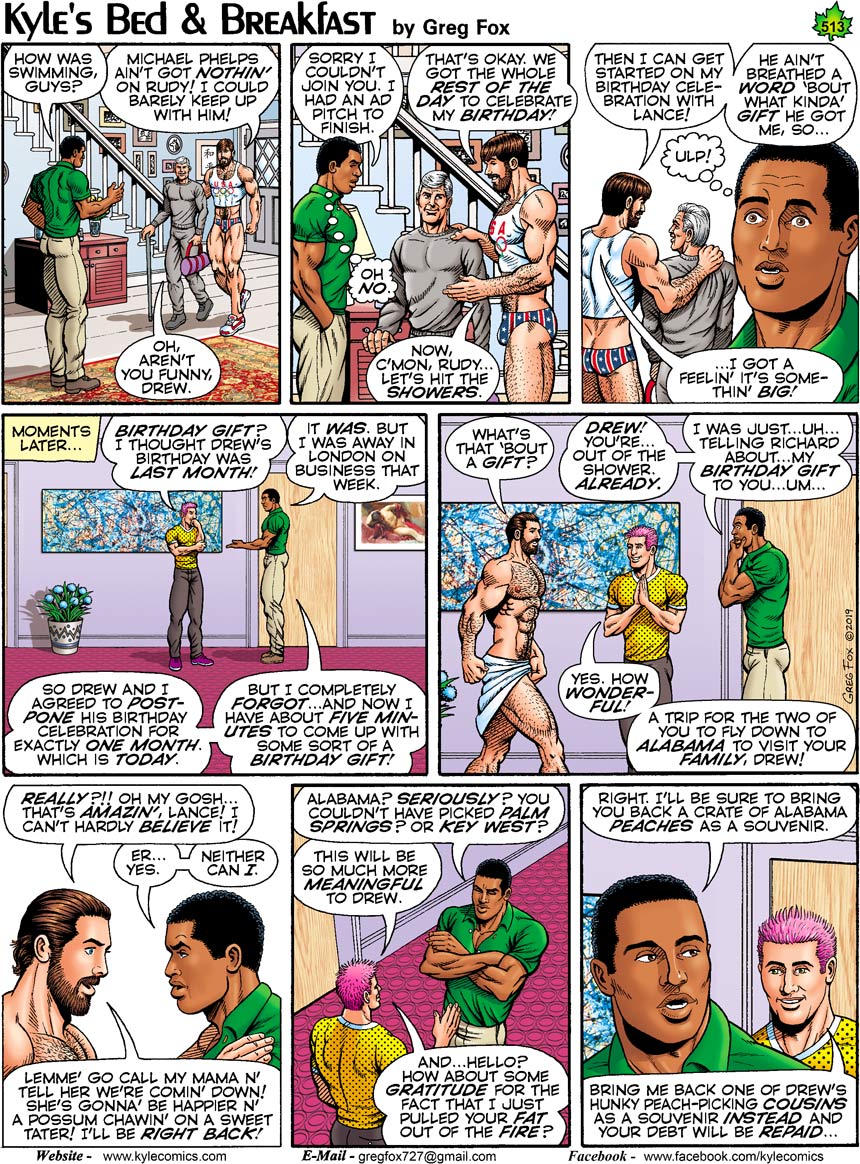 Hopefully the visit with Drew's family won't be filled with any kind of drama.

Oh, I should additionally add I glad last week's episode ended better than I'd expected. I glad no one was harassed or gay bashed at that bar. Thank you,Greg. Keep up the good work!

Once again, Richard's presence in the strip may have dwindled (sorry, but, Jaime, Sergei, & Mannis are colorful characters that add to storylines), but when he shows, he SHOWS!

He still may have pink hair, but he has more depth, maturity, and heart, and I'm glad he can still help out, even when Kyle's not around....NOW,on to DREW!😍👅

He's a sexy 'lil so-and-so, but, can he ease up on those crop-tops? (..LUV the Mark Spitz throwback speedos, though; an Ol' Fart like me, went in-SANE back in '73 over those...hence my bikini brief / speedo addiction, ha-HAA!) Although,he looks amazing with the slicked-back hair..better than a possum tatum',sweet back chewin',- what-EVER he said! ha-HAAA!🦝😉

SO, Lance, watch yourself...YOU would throw a fit if Drew forgot anything planned for you, so respect your lovers' wishes and join in on whatever make him pleased; 'cause all he'll have to do is go for a 'swim' in those speedos, and you'll be SUNK! ha-HAAA!!😭👋👻

I love this series since I found it. Great art, compelling characters and stories with twists and thrilling turns. The only thing equal is "Work That Flight Ring"! Thank you Greg for making the world a brighter place!
Nightwingcowboy@gmail.com

- Kyles Bed And Breakfast
- A Second Bowl Of Serial (...get it!?)
- Hot Off The Griddle
- Without Reservations
- Inn Mates

...they look like BIG comic BOOKS, so they make an enjoyable read, AND they have bonus material, too! : )

...speaking of 'bonus', I forgot to say, 'HEY!' to Rudy, in todays' strip: s'nice to see eldergays still being active...and, to see strapping studs be so sweet to him, like Drew!

I really don't care...I just want Lance to be with Kristian or Matt...I think that it would be more natural for this. Drew is too country....

I hope that this trip leads to Lance appreciating what he has with Drew.

Why is it always "Lance appreciating Drew?" Why can't it be the other way around..? Lance should hook up with Matt or Kristian..

Swoon over Drew in a towel!

Richard is right... Family time is more meaningful than the main gay touristy areas. A birthday gift is meant to be thoughtful, and you better thank Richard properly, Lance!

how lucky is Rudy to get to shower with Drew and watch (help) him peel off those speedos?
Kyle needs to bring in a new rule, Drew is only allowed to wear a towel or nothing (mind you, that towel covered nothing but Drew's sweet arse but I'm fine with guys dicks a-floppin' around)

now I'd be in heaven if Jeff & Drew were naked in that house at the same time (spit roasting comes to mind) - ah Jeff, hope he is doing well and still a sexy Dadfucker like Drew.

I just love this "comic" and always looking forward to the next episode. There is one thing that saddens me somehow though. Why must everyone looks as if they have a body like captain America in the comic? I noticed in this last episode that even old sweet Rudy has become a replica of Michealangelo sculpture of David.. I know it's all made up characters but what wrong in a little bit of reality?
Probably most people will not agree with me but just wanted to express my feeling on the matter.

Alabama Peaches? I think you know that peaches are in Georgia and South Carolina. Cotton and Reese Witherspoon along with Bama football boys ... maybe they serve fecal pies in Alabama.

....hey babe, you shouldn't be ashamed to express your opinion; you seem to be sincere and non-baiting about it, S'ALL GOOD... ; )
So, lemme see if I can help ya...

The Artist (Greg Fox) from what I can gather, likes to draw Superheroes, and is an openly Gay Man...which is a HUGE no-no for the Marvel Comic World. But, here, he gets to COMBINE the two, and gets to satisfy that desire of otherworldly built Men, as human, feeling MEN.

We, as Gay Men (to an extent) place our desires on the physical attributes of desirous Men; you'd have to imagine (..not too hard to do, here, since this a fictitious cartoon), is see Brad as Captain America, Drew as Wolverine, Price as Superman, etc...

YES, Rudy is looking a little 'David'-esque here, but he IS a Gay Man, who wants to stay fit, be active, live a fulfilled LIFE, and not be thought as 'weak' effeminate, or worse, FORGOTTEN.

There IS reality in the strip, but, moreso in the 'drama' of Gay Men residing in a B&B; a B&B that doesn't discriminate against race, age, sexuality, effemininity, and many other hurdles Gays (and others amongst the 'rainbow') would face elsewhere. They can just 'be' here, undressed, pink haired, (formerly) closeted, elderly, ETC. ...

Greg's been doing this, ON HIS OWN, for 20+ years; ...he must be reachin' SOMEONE! ...he sure got ME, with Drew in those Mark Spitz speedos!! grrrrrrrowwwwllll... ha-HAAA!!

I really think that Lance would be better off with Matt. That he said a trip to Alabama will only cause drew to lose his family. We all know that the souther stays are some of the most bigoted.

Greg has thrown in a few larger guys besides token bear Nick in the past, the most recent being the (fairly) recently departed Jake and Sergei. And while I wouldn't presume to speak for Greg or defend his artistic decisions, it's worth noting that this strip is basically a soap opera. And just as you'd find a disproportionate number of conventionally attractive people on a TV soap, it shouldn't be a surprise to find a bunch of hot gym rats in a comic strip about a gay B&B. Generally speaking, people like looking at conventional attractive people. THat's basically what conventionally attractive means. As a guy who's been heavy-set his whole life, I don't need to see myself reflected in popular culture to enjoy it...especially now that I'm well into middle age. I am happy with the shape I'm in and the age I'm at, but I'm just as happy looking at people in much better shape and with several less years on them. Show me all the fit young beefcake you like, society! If I want reality, all I have to do is step outside.

I'd also like to mention that Drew has been growing on me lately, and not entirely happy about it. But it's hard to resist a man in a star-spangled speedo!

...Reality / Fantasy also seems to be blurring these days, with Instagram, reality shows, Twitter, Youtube etc. , and although, there are conventionally attractive people permeating those social media outlets, it's a BOOGER keeping up appearances! : (

If One has accepted oneself, they shouldn't be bothered by a lack of 'real'-looking people, because it's (..like this comic),designed for FANTASY. I had a THANG for an 80's Soap Opera star named Steve Bond ('General Hospital') WAY back, and wanted my body to look EXACTLY like his; I accepted back in 2001, that it AIN'T gonna happen...and guess what!?

At the age of 54, I'm dating twenty-something personal trainers, Girls are commenting on my ass, I'm fit...but, I still like a little FANTASY. This ain't re-inventing wheels, so it doesn't have to be PC; just look at the BIG Studs go thru DRAMA in their lives! ¯\_(ツ)_/¯

I LUV Drew, Price, and Jamie, but I also love Sergei, Nick, Richard, Jake...UN-conventionally attractive men, who BECAME attractive, because we got to know them. THAT'S why I can't stay outta these comment boxes, ha-HAA!!

OH! and @Mark, Drew's a sweetie; I've been reading this strip for AWHILE, and he's probably the most desired Male ever to reside at the B&B, but I'm biased, 'cause Mark Spitz speedos are the MOVE! 👅🦵

I wish Richard would disappear for a while. Lather rinse repeat drama queen and whore. Enough already. Always has to be a stereotypical queen in the bunch.

Damn auto correct! Should have been "I'm glad." Have to re-read before I post. LOL!

I agree with whiskers65. Richard is just annoying and I really see no purpose for him, Price, or Brad. Why must there always be a queen who causes trouble?!? Didn't he try to sleep with Kyle's boyfriend at one point. I mean come on people, get creative. I mean you turn those three into the three stooges or something.