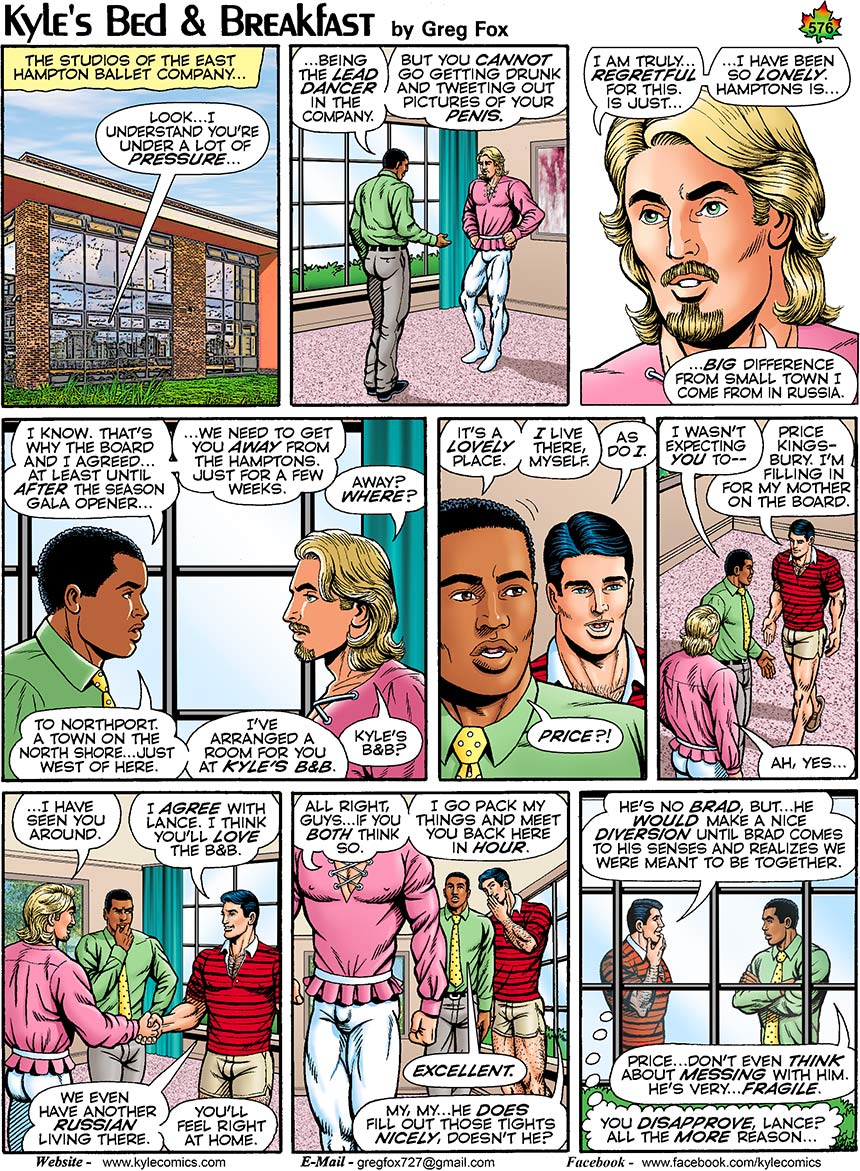 ...It didn't even occur to me, he would be Russian...he looks VERY French, with the flowing locks & swarthy, delicate features...👨‍🎨...it should be interesting to see him converse with Sergei (Ballet vs. Hockey)! ...but, I must confess this now....

Woof! I'm sure Alexei has danced the part of The Nutcracker Prince, so I'm sure he'll be able to crack Price's nuts -- Lance should have no fears there!

It may not be too far of a stretch for Alexei to offer Kyle some distraction from his hockey playing ex with his own splits!

...WELL, there goes not gettin' filthy in the comments! ..ha-HAA!

...butt...I mean, BUT, it will be interesting to see who will retrieve Alexei's affection; He comes from Russia, but complains he's 'lonely'...he seems to be a well-traveled dude, so, I don't see him not having a 'boat in every port'... Price IS showing (sexual) interest, but is still clinging to the delusion of getting Brad....

..Kyle COULD have a fling, but the sting of the breakup with Breyer is WAY too fresh, and would make him look a bit shallow, to 'move on' so fast....

I wish that the romantic development between Price and Brad could change and happen between Price and Lance. I know these two have usually been an odds with each other but their chance encounter at this ballet company could make for a slow romantic build-up between the two of them. And, their personalities aren't that much different either.

'...And, their personalities aren't that much different either.'

...THAT'S where the trouble lies! ..ha-HAA!! ..Price & Lance are VERY business-minded, savvy Men, but showing their emotive HEARTS, get them into trouble, in different ways... :

- Price, when felt 'wronged', will plot n' scheme, and destroy any partner (financially, or otherwise)..he has never (unconditionally) LOVED, and mistakes anything other, as betrayal, to HIM...

- Lance, is still LEARNING to Love, and (with Drew), HAS warmed up and become a more emotive Person, but he STILL casts a 'cold' demeanor (& distrusting mindset), that keeps others at bay from his TRUE self; There was a post sometime ago, where Drew wanted to bring up Marriage, and Lance cut him off...showing he's got a way to go....

..SO, putting them together makes for a SEXY, 'power' couple, but, neither would TRUST each other unconditionally, to LOVE...DARREN on the other hand, could be a better fit for Price; he's NOT scared of him, knows how he 'works', & balances out a 'blue collar / white collar' demographic, that could bring out the best in them BOTH...

Ah, this is fun, and a relief from the other story. First, Price's shorts and legs. He is already getting my vote for Man of the Year based based on the drawings. It'll probably be Kyle winning the sympathy vote - and he should probably win occasionally since his name is on the place.

Nice to see a new face and guest at the B&B! Will he inaugurate the newly built barn section? Not sure the B&B is the place to avoid Hampton's like drama - there's plenty of that at Kyle's, without famous faces.

Maybe Kyle and Alexei will hit it off, I'm predicting he and Sergei will not be comrades, rather they'll clash. It'd be a rebound for Kyle but could be nice.

Mannis is not giving up Jeremy, who I like more than at first (despite his being NIA). Lance and Drew should take their relationship to next level. Lance and Price are interesting and have more in common than not, though they would more likely hurt each other rather than be supportive, and it'd be a toxic blend. I used to want Price to be with Richard because of their "synergy" but Richard was annoying during Breyergate (hello, he tried to sleep with Breyer behind Kyle's back!). Can Richard just take a year away from B&B to compete on Ru Paul's Drag Race and give us a breather?

Darren and Eduardo should hook up - maybe to celebrate Eduardo's long awaited graduation - when's that happening. I'd love to see more Delia - I like her no-nonsense practical approach to life - and it's time to put more New York into the B&B. What about Jean-Pierre next door - is he still single - maybe he and Price would hit it off. How are Nick & Dave getting along as husbands? Is Aaron returning? Is Jaime still conflicted or has gf/wife tamed him? Finally, let's get Rudy some love and affection from someone not a psychopath.

..Frankie-Baby had a GOOD shot O' coffee today, 'cause he brought up characters I haven't thought about in YEARS! ...Jean-PIERRE!??

I've always felt that Price was attracted to Lance but that Darren would be a better fit for him because he can put Price in check. I honestly don't know what is so great about Brad. He's a typical dumb blond.