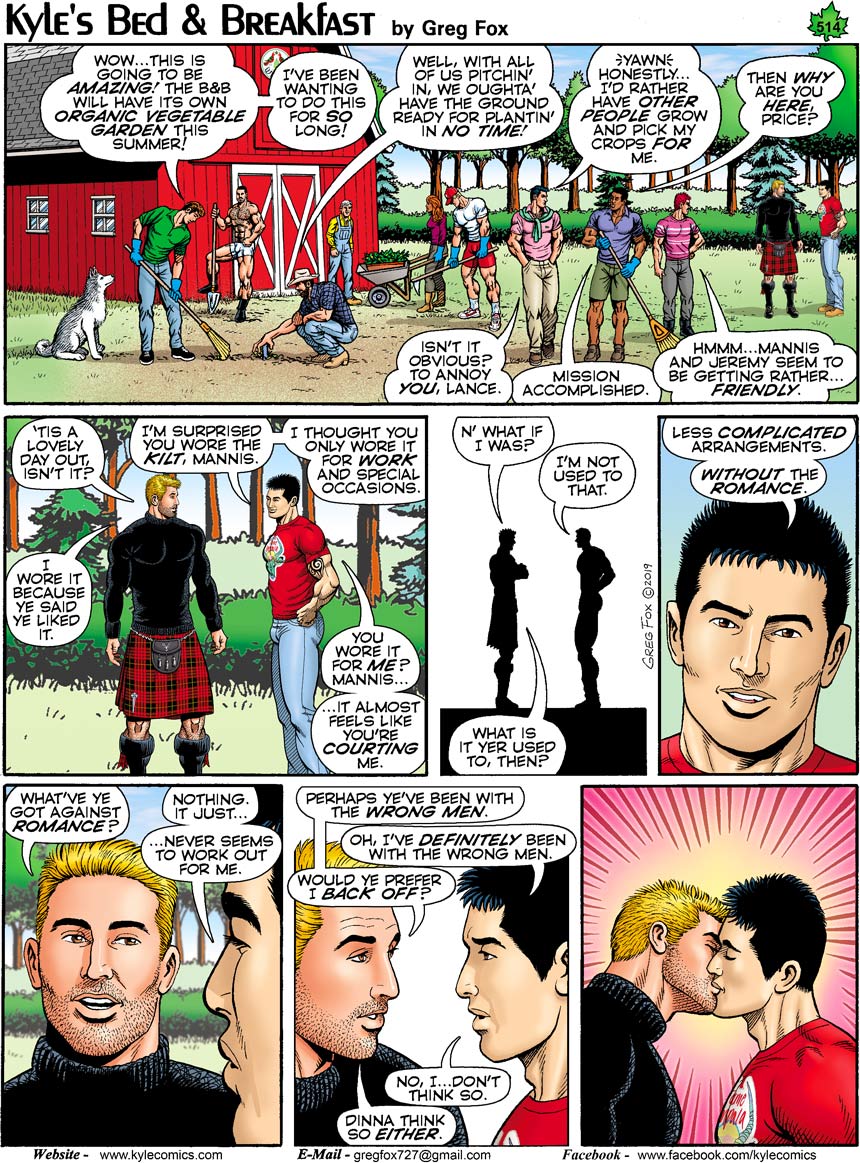 WELL, looks like Jeremy may take off with Mannis into the night, and leave the B&B, like the missed Njord & the OH-so chocolate-y Matthias (...mmm-MMM, they NEED an update, Greg!)...I would LIKE to say I'll miss them, but....don't get mad at me...

Neither didn't hand around long enough for me to get an overall impression of their personalities to draw me in as characters; Jeremy had NO kinds of storylines whatsoever, and Mannis, just....showed up. In a Kilt.

MAYBE, if they stick around, they could get me with more adventuresome storylines, with a more 'seedier' content, other than the 'soapier' ones, like the Brad / Jaime / Price angle (which I like)....jus' sayin...

But, I DO like the Gang all being here for Kyle, once again, when it comes to something nutritious n' healthy...like Breyer's big tits, holding his THICK n' LONG shovel.....DIG IN!!! ha-HAAA!!🥾😍🥕

Price shouldnt be out there if gardening is beneath him and hes not helping.

I'm just sad that Drew is not in boots, hat and nothing else...er jockstrap (damn this p c crap) and Mannis is not in JUST the kilt (or just a tiny sporran that does NOT cover anything)

and, of course that Breyer is in the background, all guys in no clothing, or very little, should get front & centre - what can I say, I like looking at naked men!!

I was gonna comment about Drew being uncharacteristically covered, but I'm still reeling from the Mark Spitz speedos in the last post...I'm also happy Breyer made an appearance, also....

Dear Greg: PLEASE give us a decent storyline instead of a convoluted one. That is all....

Here we go again , another cliched story coming up.
Already have such a terrible character in Mannis, can you make that accent and dialect any worse or more insulting ? whats next , an indian BNB guest named Hadji saying sim sim salabim?

As a counterpoint to the most recent comments, I want to say how much I enjoy this strip on a regular basis. Classic soap opera drama playing out in a fully realized setting. I feel like we circle around to most of the major characters on a regular basis, which keeps things fresh.

If I would change anything, it would be the pacing because I want it more often. But as a long-time comics reader, I know that's not possible so I'll settle for every two weeks. :)

Thanks for sharing your work with the world, Greg -- it's so nice to have a silly, dramatic, and beautiful-to-look-at escape from reality every so often.

without addressing any other comments, because opinion IS in the eye of the beholder, and others DO have a right to opinion, it behooves me to spin a spiteful rhetoric towards one person who's doing a WORLD of good for the Gay community with a project that NO ONE else has attempted to do; which is, tackle the topic of superhero artwork with homosexuality.

ONE MAN has been doing this for 21 YEARS, and, donates to charities, promotes Gay / Gay friendly politicians who stand for Gay causes & rights (Brian Sims comes to mind), and, still shows up at Gay conventions, such as The Gay Comic convention which happened at the Gay Center in NY, where OPENLY GAY people sell, discuss, trade, and share their work....PROUDLY and OPENLY.

I've said it before; he ain't reinventin' wheels here, It's what @Thom opined so succinctly, in the above post... Why get heavy?! You PRESSED 'cause the fit's too TIGHT!? you don't HAVE it view it, You don't have to undermine it. I BUY it, I SUPPORT it. I VIEW it. I LIKE it. I like to COMMENT on it...that's IT.

BUT, I'm a respectful Gay Man, who likes MAN tits n' ass, AND soapy drama, so THANKS Greg, you doin' a world of good...to ME...

@RBS7019: No one said that Greg was not talented or that he donated to the gay organizations. However, you say that he is "doing a world of good for gay men." How? Simply because he writes a strip and gives a few dollars to gay rights? You say that no one has tackled the art of superheroes and that's not true. Throughout comicbook history, this has been done by both Marvel and DC among others.

I look forward to your work because I am curious to see if you would "crack skulls" or if you will be like the other people who talk a good game only. Either way, whenever there is something that is put up for public consumption it is open to criticism and this is the case with Greg's work....(1) I DO feel as if he has ZERO clue in terms of gay racism WHICH IS RAMPANT and it's why a lot of minority gays do not vote for gay rights (2) It's the SAME theme to his stories with very little by way of actual imagination and (3) All of the models have the EXACT same body outside of that other loser Jake (THANK GOD HE GOT RID OF THAT CHARACTER!!!!).

So yes, I do think that he could think outside of the box more!!!!

I stopped reading this strip and buying Greg's books, for reasons I will not get into in-depth, but I do check on this website every few months or so. That said, RBS7079 is absolutely right. I simply wish that Greg would also defend himself on those issues and put an end to the nonstop stupidity that often plagues the comment section. Time and ignoring it has not made it go away.

Regardless, I do respect the work Greg has given the community for free overall. Again, I wish he'd put his foot down and stop the element that has driven away paying customers like myself. Even so, I do wish him the best in all his endeavors.