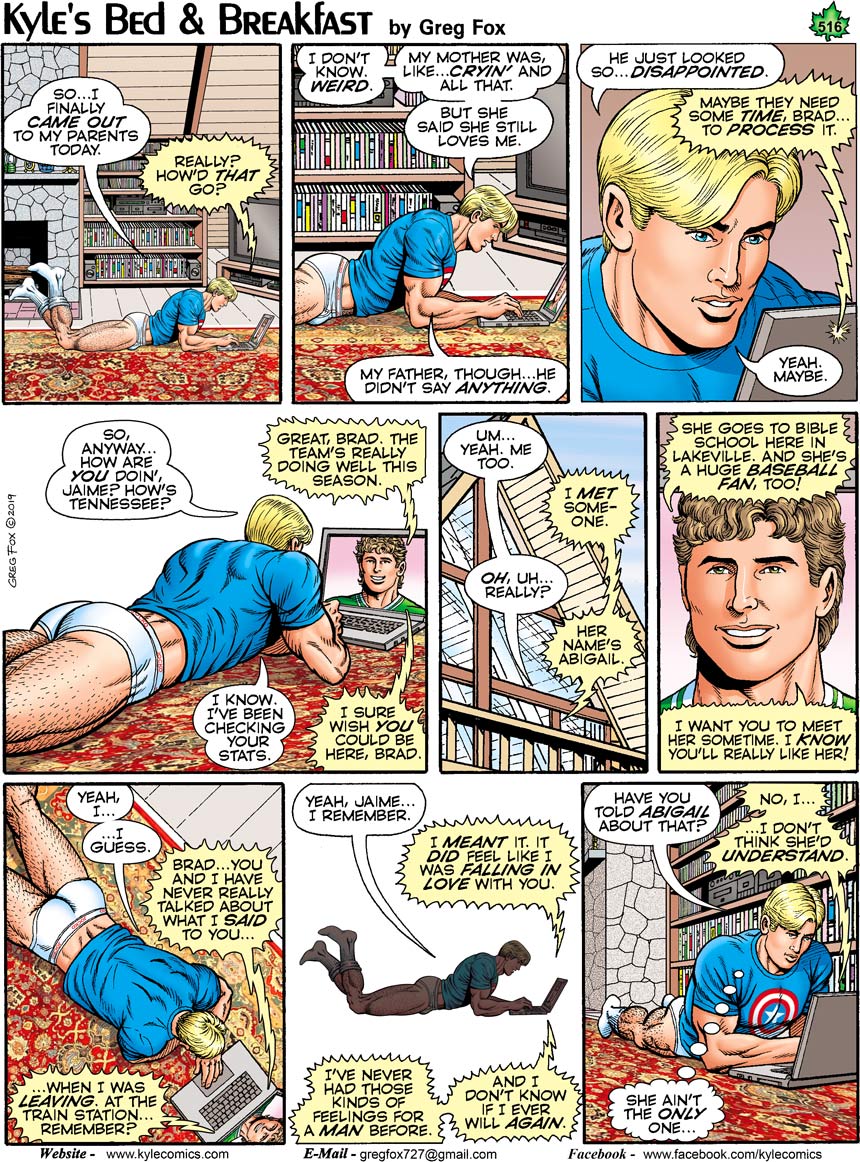 sorry for my 'French', even more since I am French but...NO SHIT SHERLOCK...she isn't the only one.

BRAD, leave it alone. I think many Gay Men AT TIMES, have a tendency to fall for Straight Men, even though we're aware we can't CHANGE them; sexuality moves in various ways, so the desired 'other' has to be on the same wavelength with you....and, Jaim-Jaim has some religious-based 'ways of life', that won't be beneficial to Brad's newly-minted "Out" status....

You CAN 'fall' for another Man, if you are a giving, caring person (like Jaim-Jaim), but if it is not based with desire, just RESPECT it, Thank it, and when the hurt resides, DO IT....with someone who wants the same 'lusty' ideals YOU want....dig?! 🤨

P.S., I wish we could've got to see Brad's discussion with his Mom / Pop about his outing; But since we never seen them in the strip visually, they probably wouldn't have 'connected' with us, because of it...

...and, speaking of 'connected', maybe Bradie should've put the Skype lens on his ASS, in panel 4...Jaim-Jaim would've had all NEW 'feelings' for Bradie Boy! ....yeah, YEAHHHHH!!😜

After Brad finally comes out, we get another closeted baseball player. This guy, though, is in denial, and he's growing a beard! Wow! Very original!

@RBS7079
I guess.
I am also one of the very rare French 'idiots' that learned more than one language.
also before I prefer the original versions than the crappy translations

Disappointed we didn't get to see Brad's coming out to his parents, but from what we know of his relationship with them, it went pretty much as we should have expected. Hope Brad's dad comes around.

If this is the resolution to the Price-Brad-Jamie triangle, it feels a bit anti-climactic. A few words exchanged on Skype and then Jamie goes back to heteroville? Would have liked a bigger denouement, either negatively or positively, but okay. Brad does seem to be taking this all rather well; either he's growing up, or he was never as seriously into Jamie as he's been into other guys he's loved.

Oh, and didn't get a chance to comment last week, but I loved the obnoxious bear patrol. Hope we see them again!

Not that I want to give anything away, but to address some concerns right here... you WILL be seeing some of the coming-out drama between Brad and his parents in future episode(s). And also... you have NOT seen the last of Jaime. Hope that puts some minds at ease! Thank you for all the kind & thoughtful comments!

I loved this character, the moment I saw his backside- I mean- was introduced to Brad..😏 and, it's nice to know the 'drama' will continue!!

...MISSED ya, Markie, always nice to read your comments, and your succinct POV;... you also balance out my TERRIBLE writing!! 🤪

Thanks, Greg! And thank you too, RB!