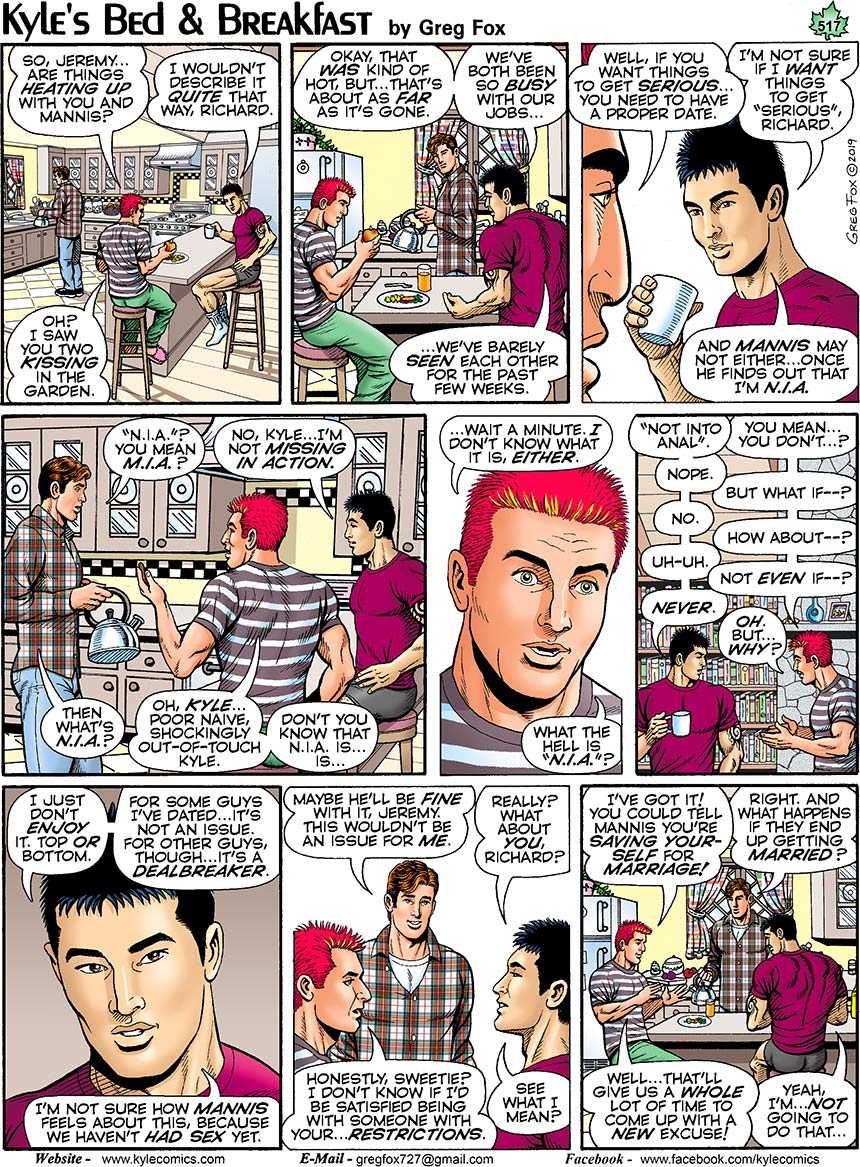 I think that the best is Jeremy and Mannis have a sincere dialogue about this, and after they decide what to do.

...well, THIS is a topic for discussion! It's clear that Jeremy (who slept with Lance prior to this relation with Mannis, so what was THEIR story?!) has to talk this situation out before they slide (so to speak) into the bedroom and not become compatible; Mannis looks / acts the type to be a 'sledgehammer' of sorts (Scottish heritage aside), and that may make him a tad frustrated'....

AANNND, I hate to say this (..don't hate me, Greg), but...we haven't been invested long enough in this Mannis / Jeremy pairing to be interested in whether they are sexually compatible; they go on ONE date to a bar, and now we have to see if they can define their 'roles'!? It's not like the Drew / Lance pairing; THAT was build-up worthy, and felt organic enough to desire whichever ones' 'role' is...

ME, personally, I 'go with the flow'; I've been with 227 pound Bodybuilders that 'flip' over fast like hotcakes (and, just as hard to navigate), and have been with 27YO, 165-pound personal trainers, that had me seeing STARS!! (...in a good way, of course, ha-HAAA!!)

JEREMY, it's very admirable that you have a prticular 'stand' in your sexual practice (and, a safe one, too), but, talk to Manni; it'll be for the better to find out what he would tolerate intimately and, who knows, he may 'open you up' to a new experience that may make you "The Leader Of The Pack"!!

....hmmmm, this topics' got me looking at Jeremy in a whole new light: s'nice he finally stepped away from the front door!! ha-HAAA!🔨🤸‍♂️🏆 👍🏻

Oh now THIS is a twist! I had no idea until recently how much of a thing this NIA is. I’ve been told it is called being a “side” as opposed to top/bottom/vers. Personally, I’m with Richard; it would be a total deal breaker for me if monogamy was the relationship goal. But it will be interesting to see how it goes.

It sounds to me that Jeremy needs to work on trust and intimacy. I find it rather unfulfilling when we as gay men rely so much on the question of whether a couple is "sexually compatible." Compatible is whether we like each other, want to know each other more, and want to reveal ourselves to another man. Sex is an expression of that intimacy. And receptive anal sex is one of the greatest expressions of that intimacy. You are allowing another man into you. Toss aside the labels of "top" and "bottom." Flip a coin to see who assumes the position. the next time change it up.

Don't get me wrong. I enjoy sex as a sport. But if I want a deep, meaningful relationship with a man based on these characters, I'd want it to be Richard. Jeremy is smokin' hot, but Richard is more in touch with himself, more assured of himself, and willing to let another man see his vulnerabilities. And I could do the same with him. Jeremy needs to understand himself more. In short, he needs to become a more authentic self by exploring why he is unable to trust and reveal himself.

I LOVE this development. I have more than a few friends who are oral-only, and I feel it's a topic that never gets discussed enough within the community. Very curious as to what Mannis' reaction will be!

This is going to be good.

leave it to Richard to reach new levels of silliness...

Hey not every guy likes the back door stuff so if youre not into it, thats perfectly fine. and if another guy cant handle it then move on, like they say to each his own.

I've never heard of NIA till this. I mean I know men who are but there's never been initials. I heard of more and more young men and bi men being ask about NIA because it's safer. Their relating had a different kind of emotional connection and monogamy isn't valued.As an old guy, it's an interesting shift for me.

I always got interesting reactions when I told people this. I've never been interested. I never thought of it independently until someone mentioned its existence. When I said this to a very opinionated person once, he said I 'owed' it to my partner, either as top or bottom. I said: 'So I should engage in a sexual act I have no interest in? There's a term for sex against one's will, you know.' He said I was over-reacting, but I don't think I was. Or people who say it means I'm not mature, or avoidant, or sex-negative. I'm not the latter, at least (can't speak to the mature, as I often hear this from people who are terrified to be thought of as old, and I'd rather skip the second one ;) ). It is not REQUIRED. It is not something I HAVE to do. And it's not negotiable. It has led to some problems, even when I've told people up front. They must think I'll change my mind.

Sexual 'acts' are just THAT, and if you are with someone who doesn't want to 'go there' (whatever the desired 'role') it SHOULD be respected...but, ya BETTER put in that work in other 'areas' to blow their MINDS, 'cause you don't wanna be a BAD LOVER, that'll follow you! ...ha-HAA!! 👎

This seems to be a common dichotomy within our community. Sex between men always become a kind of parody of heterosexual sexual interactions. "Tops" are viewed as in control and "Bottoms" viewed as weaker. I know this is not true for the most part, but when someone don't fit the suggested roles ascribed within a sexual coupling, more often than not people suggest he's missing something. We need to stop making people conform when there's no reason why they should.

First time to comment here and a fan of this site for years. (Great job, Greg!) Jeremy could very well be describing the g0y (g-zero-y) lifestyle, which is non-anal and promoting roles of partner equality, neither top nor bottom.

This is my first time commenting as well after years of silent lurking. I cannot ever recall seeing this topic arise in any gay film, book, theater production, etc., and I thought I was the only gay on the planet who felt that way (NIA). I commend Greg for going beyond the usual topics and giving a voice to what has, until now, been a very silent and ignored minority in the gay community. We all choose what we do and don't want to do in the bedroom, and NIA is certainly a valid choice that, in my experience, is usually not respected. Thank you for developing this story line.

P. S. I don't know how to change the Unknown tag it assigned me by default, but I am not the same person as the other Unknown above.