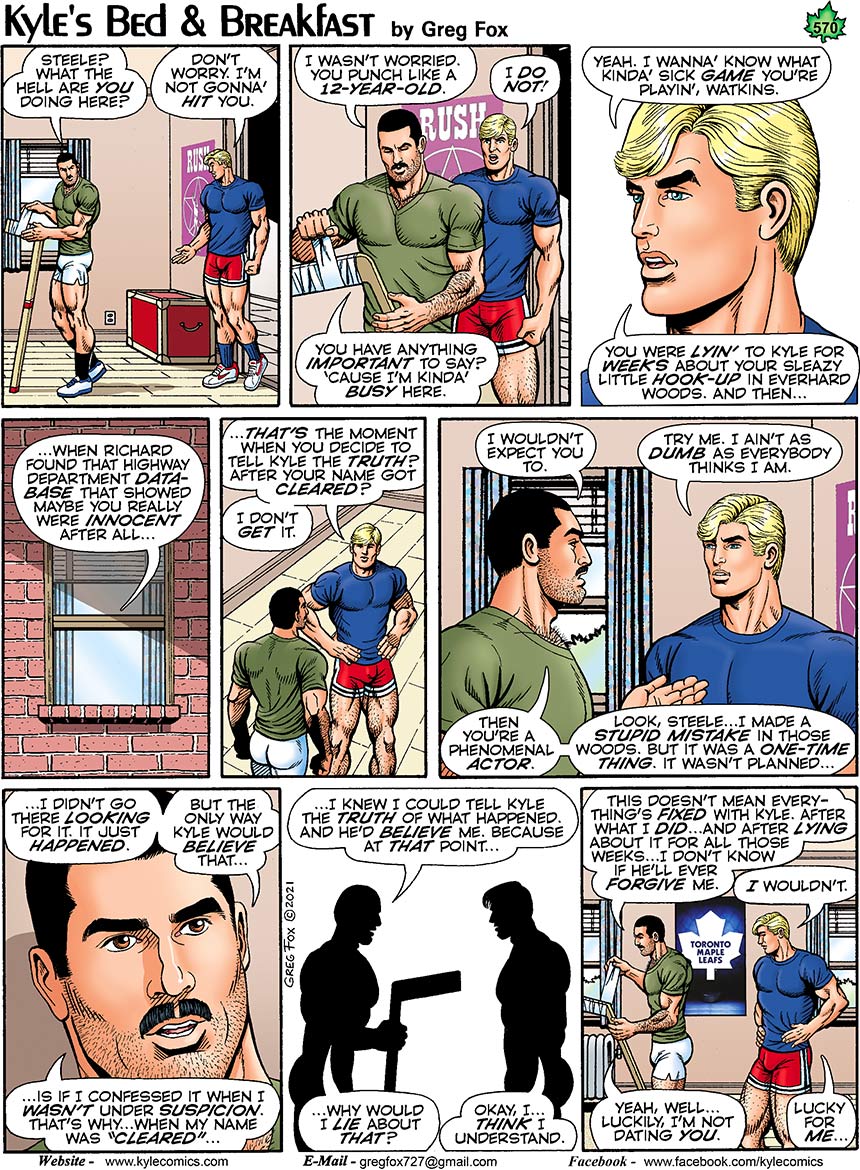 ...It seems to ME, Brey is attempting to gaslight Brad, with his 'reasoning' of admitting to his tryst, AFTER all the evidence; He had EVERY 'good time' to tell Kyle....He could've snatched Eduardo, WHILE at the Woods, and said, '...look, ya caught me. I ain't gonna pussyfoot here; PLEASE let me tell Kyle first... If he acts weird, THEN you can mention you saw me, also. I'm SO sorry 'bout this, dude....'

...He could've shown up at his door (when Kyle showed up for the comic Book convention), and said, '...I think we better skip the convention, because after what I gotta tell you, you may not wanna se me, for awhile, and that's your right. But, please sit down, and we're gonna DISCUSS this....'

...But, we gaslighted, lied, betrayed Kyle's faith / trust, demeaned, acted distant, used his Body TWICE, to deflect Kyle from approaching the situation, discussed his matter with Drew privately, yet, said NOTHING to Kyle, and ONLY told him, when Kyle felt HE was wrong, and APOLOGIZED, for feeling his mistrust was unjustified.

Brad needs to mind his own effing business and worry about his own insecurities. frankly im sick of his holier than thou portrayal. so many of the characters in kyles bnb are one dimensional aholes .

I still say that if he didn't "go looking" for it then when the guy walked up he should have been man enough to say "thanks but no thanks not why I'm here" and WALK AWAY. But instead he thought with his dick (like a lot of us do) and ended up in this situation.

And this raises another question...is a hand job sex?

To be honest, I'm getting bored with this storyline. It should have ended with the confession. Breyer just isn't that interesting.

...hmmmm...To us...uhmmm, 'experienced' Gay Men, it may not be anything to get in a tizzy about (IF, you're in a relationship), but to "Housewife-y" Gay Men, like Kyle...it is BETRAYAL, because Brey was "intimate" with someone else....

...LOOK how Kyle lives his life; Maple syrup, clean lines, timely Dinner for the guests...He lives a VERY domesticated life(style), and wants his relationships to be an EXTENSION of that...and Brey probably KNOWS this, too, which is why he hasn't moved in with Kyle, proposed Marriage, etc. ....

...If Kyle was a little more.... open, as to what Brey wants / needs in the relationship, AND, has discussed 'deal-breakers' early, he probably would let it roll off his back.....BUT, he's been letting almost ALL the B&B'ers meddle into HIS personal affair, which shows he has NO backbone, as to handle his own relationship...

Sorry, I like Breyer...No, I'm not sorry I like him. He's way sexier than some of those one dimensional sphincter muscles Mi Ci mentioned -- like Brad. Breyer screwed up once. He finally came clean. Let him and Kyle work it out. Did Saint Kyle not ever sin???

And BTW...Breyer's muscular hindquarters are to die for!!

There is nothing wrong with the "maple syrup" type of gay life. Hell, they could be maple syrup in the streets but a freak in the sheets. We just don't know but why should Kyle be something that he isn't? If Breyer wanted more "excitement" then he should never have entered into a relationship with Kyle...


I do agree with some other readers about this is dragging on way too long.

So tired of Brad's snotty attitudes towards the others.

If a hand job is sex, I'm a much bigger whore than I thought. Good times, good times.

If I managed to travel 10 years into the future I imagine we'd still be in the midst of this storyline. It raised some interesting discourse, but the drama is overstated. Let the relationship die, they can remain good friends. Breyer should date Price - who is a bit libertine and adventurous, and open to threesomes as sometimes hinted. Both are athletes. Breyer has his own place so no awkward moments need happen at BnB. "Team Kyle" will dislike Price, but he's already disliked. I support this suggestion - ends the Breyer/Kyle storyline and preempts a return to storyline of Price pining away for Brady.

Breyer, acted badly (it wasn't the crime, rather the coverup and subsequent lies) but he was honorable years ago when a drunken Richard made a pass and Breyer rebuffed that and told Kyle. That's why Richard should stay out of this story (let's all stay out of this story). I like that these BnB has a cast of people who mostly have good moral character and decency. Within that framework they are a bit one-dimensional at times. It would be refreshing and honest to see the characters, especially the couples, discuss open relationships, boundaries about extra-relationship encounters or hookups because that happens in real life. Not with everyone, That's may be a stereotype, but it's a reality for married people of many orientations.

P.S. Brad is so wound up his thighs are larger than Breyer's torso - it's time for Price to invite him to the drive-in.

- The Breyer / Price 'union':
..y'know, these Two, only met ONCE (at a superhero party!?), and I imagined they would rip each other's FACES off...BUT, Price would demean Brey's 'workman' ethic(s), with flippant ease, and Brey seems to be going thru some moral shift with trust / monogamous boundaries, right now... yet, we DO need to see Price back in action, again...Boy, I miss that FAT BOOTY in those itty-bitty shorts!! 😈

- WAS Brey a standup Guy?:
...I remember the Rich / Brey 'pass', and I remembered being a bit miffed that he told Kyle SO fast, instead of keeping it a secret, and having a sitdown with Rich...AND, remember when Kyle waited for Brey to come back from Canada, to watch..."The Joker"(?) Movie, and Brey said he SAW it already, WITHOUT Kyle!?

- You, Me...and HE... :
...I would LOVE if Greg shows us a more...ummm... 'lascivious' side of the B&B characters (I STILL live for that suck-off 'facial' Brad gave to Price); implied kinky talk, threesomes, one-night stands...there's such as myriad of things (certain) Gay Men have gone thru with a partner; it WOULD be nice to be shocked by an 'admission' or two, from the characters...