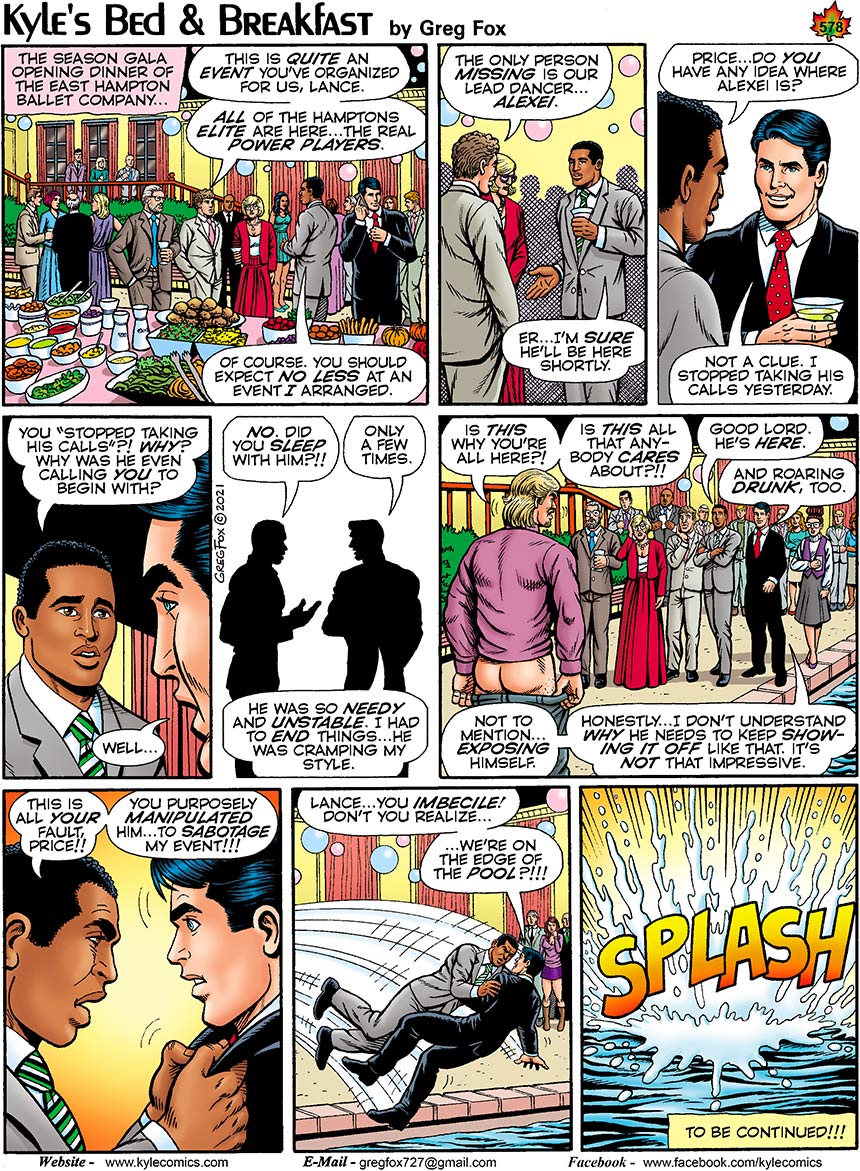 PRICE:
..Ol' Boy clearly-clearly-CLEARLY hasn't stopped luvin n' leavin', which probably why Brad hasn't become his paramour; He HAD to know it would mess with Lance's chances of impressing the Ballet Co., and, wouldn't make HIS Family (The Kingsburys), look good with the upper-crust players, either, since he's in the closet with them...

LANCE:
..Lancie Boy was the One who invited Alexei to stay at the B&B, so, he should've known SOMEONE there was gonna slide into 'Lexi's tight Buns; ...I didn't know 'Lexi had a drinking problem, also, so that's ANOTHER can O' worms...Lance seems to have anger issues, too, with his grab N' dip with Price.... let's hope he doesn't get hit with a 'He's A Thug' comment....

ALEXEI:
..."...Is THIS all anybody cares about?!!" ...Only the BACK, Man! ...ha-HAA!! ...Seriously, the Man has issues with his sexuality, & how to navigate it; He wants Love, but sleeps around, becomes clingy, and then, it goes awry, he 'exposes' himself (Grindr, cam shows, showing his 'peacock' at Galas, etc.).... Lance was nice enough to ingratiate himself with the B&B guys, he should've 'reformed' himself, to just meet 'nice' People, and go from there...

..then again, he probably would've fell into the POOL!! ..SPLASH!!

have we jumped the shark ?

hmm so Lance bets all the relaunch campaign on the controversial (and clearly problematic) dancer and he doesn't check on him or put him under some kind of control? doesn't make much sense...

Lance and Price have certainly made a SPLASH on the Hamptons' scene!!! I would say @RBS7079, these two are better than Cristal and Alexis any day!!!

And as for Alexei and his juicy, Russian rump...well, Price may have popped his Cyrillic cherry, but Lance will get him to relever once more!!

First thing that I thought of was this classic Dynasty scene

And Lance's PR skills leave much to be desired.

Last thing the party needed -- after that prima donna pee-pee peek-a-boo -- was 2 queers in a catfight.

I'm not a violent person, but I wish that Lance would have punched Price.

The Dynasty cat fight with Krystal and Alexis in the pond is legendary, but this one is also amazing. https://www.youtube.com/watch?v=IN-ut_5i_Bw

This was indicative of how a lot of gay men interact with each other and how the gay community truly is. (1) gossipy, (2) manipulative, and worse (3) burning bridges also (4) can't stand to see other gay people succeed. This episode had all of that but I find some inconsistencies such as : (1) if Price had that much money, why is he staying at a bed and breakfast? (2) Lance's character checks out people before, why didn't this occur before? That being said: I wish Lance had knocked him out.

Why does absolutely EV-RY-THING in that event seem out of a 1980 high school party in redneck America?

I wonder what the Hampton Ballet company will think of this fracas?

Lance should have known that Price would've pulled something underhanded like this..giving their long historical dislike for one another.

But on another note, I can't wait to see how this plays out!

I love how this strip situates itself in the history of great television soap operas, but substitutes (almost) every character with a gay man. If only we had a show like this on TV! I would definitely watch it.

Also, I think the reason Price lives in the B&B is that he's lonely and the other residents are the closest he has to friends. He might be unlikable, but that's what gives him depth. We need more characters like him at the B&B.

Not sure why Lance is blaming Price for this -- not like Price choreographed the whole disaster at the party.

Alexei is an alcoholic and a sexual compulsive/exhibitionist. There was a good chance that he'd whip it out at any cocktail party no matter what.

Lance should have sent Alexei to rehab -- like all other creeps do when they get into a PR disaster. In real life, this would be career suicide for anyone in PR>

yes, to be honest that's really ridiculous and so far away from reality that it isn't even funny. The strip has had some moments of suspension of disbelief but this is extra, especially considering how Lance and Price have been pictured in the past years (the brilliant PR, the spoiled and bitchy but conscious of his upbringing golden boy).
I don't even agree that "this is how gay men interact": this is how gay men interact -in cheap soap operas.
Globally, a disappointment here.

I'm not sure why it's Lance's responsibility to take care of Alexei. Yes, Price planned this and we all know this. But why is Lance being blamed? I don't get it, had it been me, Price would've been knocked out cold. Kind of Dynasty-ish with Alexis vs Dominique. That being said: it's kind of obvious as to what's going to happen next. I know that everyone has drama but kind of getting tired of Price (1) getting a free pass and (2) episode after episode of him conniving. I would like to see a twist like: his family cutting him off or something. We need something fresh and new.

OMG yes. I honestly can’t stand Price. Like he’s such a manipulative person. Price has been using this man during his stay at the BnB and then he ended it off in such a cold way. I really hope Price gets taught a lesson somehow.

I hope Brad gets super jealous, throws Alexei in the pool, gets together with Price, and they're the new power couple of the B&B.

A few odd things about this story. Since Alexei and Price live in the same house / share same shower, kitchen, etc. (making hooking up easy) how is it Price cuts of contact by not taking calls? I suppose this story is looking for a physical rematch of Price and Lance (after the wedding cake fight years ago) - it would have been better to see them wrestle in a pool at home or in their shower rather than at a public event which tarnishes both their careers and reputations. Oddly, Alexei is already known for being scandalous and likely suffers the least damage. Not a good example gay people are displaying in mixed company and I'd not want this group doing my PR, finances or dancing after all of this. Of course, it will go viral on social media, the ballet company will be more popular than ever.

....oh, belieeeeeve me, Frankie baby, this was done for D*R*A*M*A; Greg probably saw us talkin' about "Dynasty" a couple of Eps back, and thought it would make for good story fodder....

Price & Lance's cake fight was not only hilarious, but, damned SEXY, with Lance's hulking thighs bursting at the seams, in his Brooks Brothers suit, and Price in those itty bitty whiter shorts (with the ass cheek hanging out), and, that tight green shirt /socks combo....MEOW! ..ha-HAAA!! (*P.S., it's Ep. 392...)

...All I know is both better get together to clean up this PR disaster; It's very implausible in real-life, but, it's a Comic strip, so, let's hope it has a reasonable fix....WITHOUT Social Media 'likes'!!